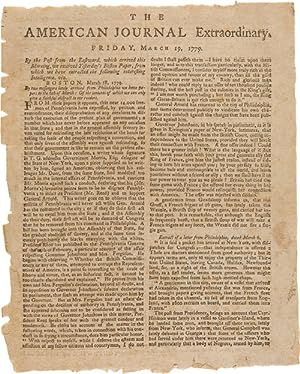 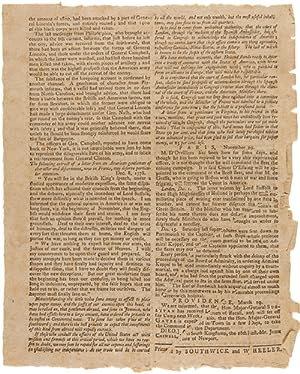 Published by Printed by Southwick and Wheeler, [Providence], 1779
Save for Later
From William Reese Company - Americana (New Haven, CT, U.S.A.)

Broadsheet, 10 1/4 x 8 1/4 inches, printed in two columns. Quarto. Wear, especially along one edge, and light soiling. Very good. This extra, issued the day after the first issue of this newspaper, has intelligence extracted from "Yesterday's Boston Paper" containing news from Pennsylvania that 14,000 freemen "have expressed, by petition and remonstrance, their disapprobation of any measures to disturb the execution of the present plan of government; a number which has never before appeared on any occasion in that State." There is a long discussion of news concerning British peace feelers (what was called the Carlisle Commission after its leader, the Earl of Carlisle), who were proposing some limited autonomy for the Americans if they would relent in their revolution. The paper also contains news that the "post from Providence, brings an account.that a body of Negroes.had been attacked by a part of General Lincoln's forces, and entirely routed; and that 1400 of this black corps of men were killed and taken." Issued weekly from March 18, 1779 through January 27, 1781, thereafter semi-weekly through Aug. 29, 1781, the AMERICAN JOURNAL was the fourth newspaper to be published in Rhode Island and the second to be published in Providence. Solomon Southwick had published the NEWPORT MERCURY, but was forced to leave when the British occupied Newport in 1776. The American Antiquarian Society has a nearly consecutive run of this periodical, starting with the first issue on March 18 and running through July 12, 1780, but does not have a copy of this extra. The earliest issue held by the Library of Congress is April 15, 1779. Brigham shows only one holding of this extra, at Brown University. Rare. EVANS 16186. Seller Inventory # WRCAM48517