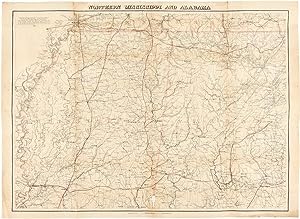 Single sheet, 25 x 34 inches. Old fold lines; some wear and minor loss at folds, neatly reinforced and repaired with tissue on verso. A few small tears at edges, minor soiling. Very good. A highly detailed map of the northern half of Mississippi and Alabama, showing the border with Tennessee and all points south to Vicksburg and Montgomery, produced to support the operations of the Union Army there in 1864. This is one of several maps compiled by the U.S. Coast Survey in an attempt to adequately map the South during the Civil War for military purposes. A note on the map indicates that the present map was compiled from various sources, including "campaign maps and information furnished by Capt. O.M. Poe, Chief Engineer, Military Division of the Mississippi, and by Capt. W.E. Merrell, Chief Engineer, Department of the Cumberland." Merrill was Sherman's chief topographical engineer, and he contributed to several important maps of the area, including one of Northern Georgia produced in Chattanooga following the vital capture of that city. With the beginning of the Civil War the United States Army found itself scrambling to obtain adequate field maps for military operations in the South. The most established cartographic branch of the government, the Coast Survey, was pressed into service to provide these maps, some with a coastal component, but mainly for landlocked locations. The cartographers of the Coast Survey reviewed all of the existing cartography available, but also drew on military and scouting reports and covert agents to assemble the most detailed maps possible, noting places, roads, railroads, and natural features. The topography is illustrated with hachured and shaded relief, and railroads are shown in red. The circulation of these maps was regulated, and only officers of the rank of major or higher were supposed to control copies. As a result, they are rare today. Two key figures in the Coast Survey effort during the war were Henry Lindenkohl and his brother Adolph, who were responsible for actually drawing many of the field maps. The Lindenkohls were born in Germany, but emigrated to the United States as teenagers and became American citizens. Adolph had already worked at the Coast Survey before the War began, and Henry joined in 1861. Together they made a huge contribution to the war effort through their superb cartographic work, producing and revising maps of different theatres of operations through 1865. Both continued with the Survey for the rest of their lives; Adolph died in 1904 after fifty years on the job, and Henry in 1920 after fifty-nine years. Seller Inventory # WRCAM46117