Skip to main content
Home Fay, Theodore S. VIEWS IN NEW-YORK AND ITS ENVIRONS, FROM ACCURATE, ... 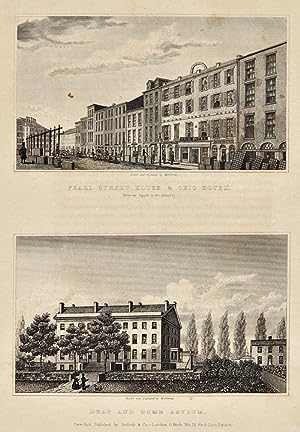 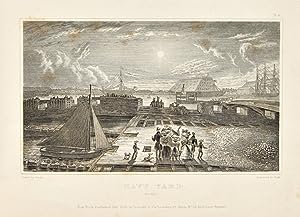 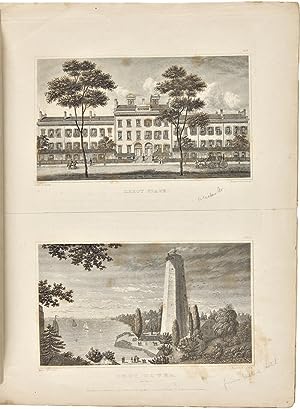 VIEWS IN NEW-YORK AND ITS ENVIRONS, FROM ACCURATE, CHARACTERISTIC & PICTURESQUE DRAWINGS, TAKEN ON THE SPOT.

Title-leaf, [i]-58pp. Without the final two leaves of text (misnumbered [43]-46), and lacking pp.35-36 and rear wrapper of Part IV. Thirty-seven (of thirty-eight) engraved views on fourteen (of fifteen) sheets, plus folding colored map. In the original seven parts. Quarto. Printed paper wrappers. Minor wear and chipping. Very good. In a clamshell case. An extremely rare set of the "Peabody Views" of New York, in the original parts as issued, with text by the editor, Theodore Fay. The parts were issued from 1831 to 1834, published by Peabody & Co. in New York and bookseller Obadiah Rich in London. The views were engraved and the text printed entirely in New York, Rich acting as the London distributor. The Peabody Views "offer fascinating glimpses of New York in the 1830's" - Deák. Together with the Bourne series issued in 1830-31, they are the first series to show a broad spectrum of American urban life. At least seven artists contributed to the series, with the views showing a mixture of topographical scenes and elevations of important buildings. Deák notes the plates are "energetically conceived, with a thrust towards a painterly effect.a combined process of etching and engraving, requiring prolonged and meticulous craftsmanship, was used in transferring the drawings for both the Peabody and the Bourne views to the plate.the two sets of New York views represent American printmaking at a high level." A complete list of the views is given in Deák, but scenes include "Broadway from the Park," "Bowling Green," "City Hall," "Navy Yard Brooklyn," "Short Tower," "Elysian Fields Hoboken," "Merchants Room Exchange," "Hudson River from Hoboken," "Park Theatre - Park Row," "Holt's New Hotel," "Webb's Congress Hall," "Deaf and Dumb Asylum," among others, as well as the large colored map of New York. This work is bibliographically complex, and various misprints and misunderstandings, coupled with the great rarity of complete sets, has further muddied the picture; however, we think we have figured it out. The work was originally intended to be issued in ten parts, of which only eight were actually issued; however, the last "part," not present here, consisted of just two supplementary leaves of text, misnumbered [43] through 46. This has led Howes and others to state the book has only forty-six pages, when in fact it should collate: preliminary leaf, [i]-58,[43]-46pp. There is a folding map and there should be fifteen plates. Deák mis-states this and claims there are sixteen plates, but her own listing reveals this to be incorrect, and it is evident that she misread Stokes, who describes sixteen plates including the map. Of the fifteen plates, two (those of the Episcopal Seminary) and three other scenes (including the Penitentiary and Oil Cloth Manufactory), and the plate of LaGrange Terrace, are almost always missing (they are the final two plates in the series). The Episcopal plate is in this set, but the LaGrange plate, is lacking. The original seven parts are complete except for pages 35- 36 of the text, which is lacking, as well as the final pages 43-46. Stokes notes complete sets at The New York Public Library and New-York Historical Society, while the NUC locates sets at the Library of Congress and Boston Public Library. This set of the Peabody Views in the original parts is an exceptionally rare American view book from an early period, and a most important series of New York views. DEÁK, PICTURING AMERICA 399. STOKES, ICONOGRAPHY OF MANHATTAN 102. Seller Inventory # WRCAM47207

Title: VIEWS IN NEW-YORK AND ITS ENVIRONS, FROM ...