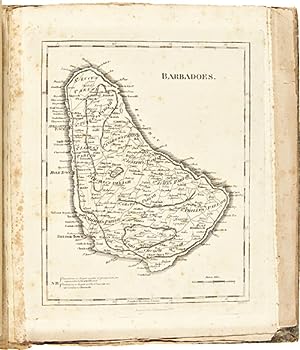 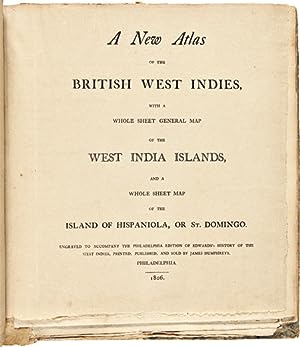 Two leaves of text and eleven maps (three folding). Quarto. Original marbled boards, neatly rebacked in antique calf, spine gilt, leather label. Text leaves lightly toned, scattered foxing to maps. Slight separation at folds of Hispaniola map. A few small tears at edges. About very good. A rare early American atlas, published to accompany the Philadelphia edition of Bryan Edwards' HISTORY OF THE WEST INDIES (1806), first published in London in 1793. Edwards (1743-1800) was a British politician and sometime Jamaica planter. "Edwards was a diligent and able writer of West Indian history. Of his literary works, the most important is his two-volume HISTORY, CIVIL AND COMMERCIAL, OF THE BRITISH COLONIES IN THE WEST INDIES, published in London in 1793. According to Elsa Goveia, its scope is large, providing 'a complete account of the British islands - their origin and progress, their political system, their inhabitants, customs, institutions, agriculture and commerce.' Edwards wrote that he attempted 'to describe the manners and dispositions of the present inhabitants, as influenced by climate, situation, and other local causes.an account of the African slave trade, some observations on the negro character and genius, and reflections on the system of slavery established in our colonies.' This classic work ran into five editions, was expanded to five volumes in the last edition, which appeared in 1819, and was translated into French, German, Dutch, Portuguese, and Italian" - DNB. This production is notable as a piece of early American cartography. The first American atlas of any kind was produced in 1794 by Mathew Carey, also of Philadelphia. James Humphreys (1748-1810) was an ambitious Philadelphia printer who began printing prior to the Revolution. His unwillingness to openly side with the American cause during the war resulted in his being labeled as a Loyalist, which had a somewhat negative impact on his later career. He left Philadelphia with the British, moving to New York and then later to England and Nova Scotia before returning to Philadelphia in 1797 to reestablish his press. This handsome atlas is one of the most important of his publications from his later career. The maps were engraved by Joseph H. Seymour, an American-trained engraver who began working for Isaiah Thomas in Worcester, Massachusetts as early as 1791. He worked for Thomas extensively until relocating to Philadelphia from about 1803 to 1822, where he continued his trade as an engraver, producing this atlas, among his other works. The maps are as follows: "A General Map of the West Indies," as well as individual maps of Jamaica, Barbados, Grenada, St. Vincent, Dominica, St. Christopher and Nevis, Antigua, the Virgin Islands, Tobago, and Hispaniola. The "General Map" as well as the maps of Jamaica and Hispaniola are larger, folding sheets. SHAW & SHOEMAKER 10342. DNB (online). Seller Inventory # WRCAM46236

Title: A NEW ATLAS OF THE BRITISH WEST INDIES, WITH...