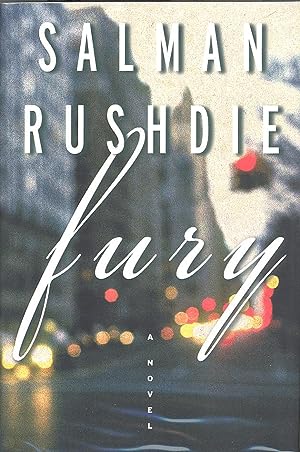 Quantity: 1
View all  copies of this book
Buy Used
Price: US$ 15.00 Convert Currency
Free Shipping Within U.S.A.
Save on shipping

Additional items from this seller ship for free.

"Life is fury. Fury-sexual, Oedipal, political, magical, brutal- drives us to our finest heights and coarsest depths. This is what we are, what we civilize ourselves to disguise-the terrifying human animal in us, the exalted, transcendent, self-destructive, untrammeled lord of creation. We raise each other to the heights of joy. We tear each other limb from bloody limb."
Malik Solanka, historian of ideas and dollmaker extraordinaire, steps out of his life one day, abandons his family without a word of explanation, and flees London for New York. There's a fury within him, and he fears he has become dangerous to those he loves. He arrives in New York at a time of unprecedented plenty, in the highest hour of America's wealth and power, seeking to "erase" himself. Eat me, America, he prays, and give me peace.
But fury is all around him. Cabdrivers spout invective. A serial killer is murdering women with a lump of concrete. The petty spats and bone-deep resentments of the metropolis engulf him. His own thoughts, emotions, and desires, meanwhile, are also running wild. A tall, green-eyed young blonde in a D'Angelo Voodoo baseball cap is in store for him. As is another woman, with whom he will fall in love and be drawn toward a different fury, whose roots lie on the far side of the world.
Fury is a work of explosive energy, at once a pitiless and pitch-black comedy, a profoundly disturbing inquiry into the darkest side of human nature, and a love story of mesmerizing force. It is also an astonishing portrait of New York. Not since the Bombay of Midnight's Children have a time and place been so intensely and accurately captured in a novel.
In his eighth novel, Salman Rushdie brilliantly entwines moments of anger and frenzy with those of humor, honesty, and intimacy. Fury is, above all, a masterly chronicle of the human condition.

Fury is a gloss on fin-de-sičcle angst from the master of the quintuple entendre. Salman Rushdie hauls his hero, Malik Solanka, from Bombay to London to New York, and finally to a fictional Third World country, all in order to show off a preternatural ability to riff on anything from Bollywood musicals to revolutionary politics. Professor Solanka is propelled on this path by his strange love of dolls. He plays with them as a child; as an adult he quits his post at Cambridge in order to produce a TV show wherein an animated doll, Little Brain, meets the great thinkers of history. Little Brain becomes a smash hit, and perhaps inevitably, Solanka finds himself in America. (It's not only the show-biz version of manifest destiny that brings him to the New World: one night in London he finds himself standing over the sleeping figures of his beloved wife and child, frighteningly close to stabbing them. This intellectual puppeteer is, of course, fleeing himself.)

Now, in New York, he is filled with wrath. Solanka is far from being an Everyman, but his fury is a kind of Everyfury. It's road rage writ large--the natural reaction to an excess of mental traffic. There are several books running simultaneously here: a mystery, a family romance, a bitingly satirical portrait of millennial Manhattan, and a sci-fi revolutionary fantasy. A single fragment gives a sense of Rushdie's reflexive multiplicity: when Solanka finally faces his memories of childhood, he recalls "his damn Yoknapatawpha, his accursed Malgudi." Here's a writer who, leading us into the tender places of his protagonist's soul, stops long enough to reference not just Faulkner but Narayan as well. If it sounds like a bit of a mess, it is. If it sounds frighteningly intelligent, it's that too. --Claire Dederer