Items related to The Adventures of Tintin: The Castafiore Emerald, Flight... 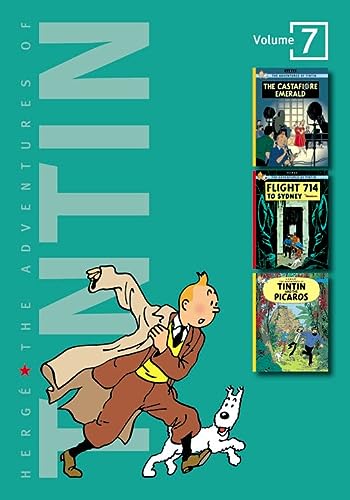 The Adventures of Tintin: The Castafiore Emerald, Flight 714, Tintin and the Picaros (3 Complete Adventures in 1 Volume, Vol. 7)

Quantity: 1
View all  copies of this book
Buy New
Price: US$ 24.99 Convert Currency
Shipping: US$ 3.98 Within U.S.A. Destination, rates & speeds
Add to basket

Title: The Adventures of Tintin: The Castafiore ...

Three classic graphic novels in one deluxe hardcover edition: The Castafiore Emerald, Flight 714 to Sydney, and Tintin and the Picaros.

The Castafiore Emerald was Herge's third-to-last completed Tintin story, and the most unconventional. Rather than a globe-trotting adventure, it takes place completely at Marlinspike Hall, where an incapacitated Captain Haddock is being nursed back to health by an unwelcome visitor in the form of Bianca Castafiore, the "Milanese Nightingale" who then suffers a devastating loss ("Mercy, my jewels!"). It's disfavored by some fans due to the lack of action, but the locked-room mystery, character interactions, running gags, and crazy Calculus inventions keep it fun and definitely worth reading.

Flight 714, Herge's second-to-last completed Tintin story, is a high adventure featuring a gallery of returning characters, though it's a new character, Laszlo Carreidas, "the millionaire who never laughs," who starts the trouble by inviting Tintin and his friends to skip their commercial flight to Sidney to accompany him on his private jet. That leads to a complicated ransom plot, and the action just gets more outlandish from there. Suspend disbelief, though, and Flight 714 is one of Tintin's more thrilling rides.

Finished in 1976, Tintin and the Picaros was Herge's final completed Tintin adventure, and interestingly, he used it to return to a scene from 40 years earlier: The South American republic of San Theodoros, where Tintin met General Alcazar in The Broken Ear. Alcazar is again facing trouble from his rival, General Tapioca, and numerous other characters from the past weave themselves into the story. While Tintin and the Picaros is entertaining, Herge was slow to finish it, and his world-weariness is reflected in the attitudes of some of the characters.

The 3-in-1 format provides excellent value, but the small size (about 40% smaller than the single-story paperbacks) makes it harder to enjoy the detail in Herge's layouts. --David Horiuchi