Home Mukherjee, Bharati The Holder of the World
Stock Image 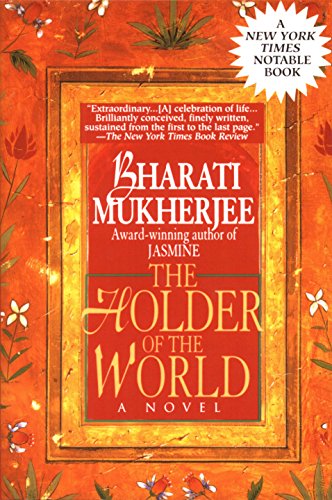 Quantity: 1
View all  copies of this book
Buy Used
Price: US$ 7.50 Convert Currency
Shipping: US$ 5.00 Within U.S.A. Destination, rates & speeds
Add to basket

Title: The Holder of the World

“An amazing literary feat and a masterpiece of storytelling. Once again, Bharati Mukherjee prove she is one of our foremost writers, with the literary muscles to weave both the future and the past into a tale that is singularly intelligent and provocative.”—Amy Tan

This is the remarkable story of Hannah Easton, a unique woman born in the American colonies in 1670, “a person undreamed of in Puritan society.” Inquisitive, vital and awake to her own possibilities, Hannah travels to Mughal, India, with her husband, and English trader. There, she sets her own course, “translating" herself into the Salem Bibi, the white lover of a Hindu raja.

It is also the story of Beigh Masters, born in New England in the mid-twentieth century, an “asset hunter” who stumbles on the scattered record of her distant relative's life while tracking a legendary diamond. As Beigh pieces together details of Hannah's journeys, she finds herself drawn into the most intimate and spellbinding fabric of that remote life, confirming her belief that with “sufficient passion and intelligence, we can decontrsuct the barriers of time and geography....”

Bharati Mukherjee was born in Calcutta. She attended the universities of Calcutta and Baroda, where she received a master’s degree in English and Ancient Indian Culture. She came to America in 1961 to attend the Writer’s Workshop and received a master of fine arts and Ph.D. in English from the University of Iowa. She became an American citizen in 1988. She is a professor of English at the University of California at Berkeley and is married to the writer Clark Blaise.

Mukherjee is the author of eight books of fiction—Desirable Daughters, The Tiger’s Daughter, Wife, Darkness, The Middleman and Other Stories (which won the National Book Critics Circle Award in 1989), Jasmine Leave It to Me, and The Holder of the World—and two books of nonfiction, written with her husband, Days and Nights in Calcutta and The Sorrow and Terror.