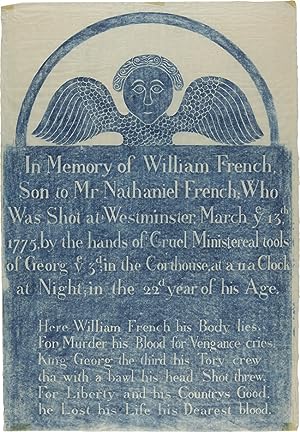 GRAVESTONE RUBBING OF THE HEADSTONE OF WILLIAM FRENCH, KILLED BY BRITISH OFFICERS DURING THE WESTMINSTER MASSACRE]

Single sheet of textured rag paper, 36 x 25 inches. Mild edge wear and light wrinkling. Very good. A striking gravestone rubbing of the original slate headstone of William French, one of two young colonists killed by British troops in Westminster, Vermont on March 13, 1775. French was a week shy of his twenty-second birthday at the time, and was part of a band of farmers who had taken over the local courthouse in opposition to what they saw as the tyranny of King George III's court system and as a protest against New York creditors looking to foreclose on them before the Fall harvest. When the farmers wouldn't leave the courthouse, a New York sheriff ordered his men to fire on the protesters, resulting in the deaths of William French and Daniel Houghton. This incident, known as the Westminster Massacre, catalysed American colonists in the Connecticut River valley in the early stages of the Revolution. The rubbing of the headstone reads: "In Memory of William French, Son to Mr. Nathaniel French; Who Was Shot at Westminster, March ye 13th, 1775, by the hands of Cruel Ministereal Tools of Georg ye 3d; in the Courthouse, at a 11 a Clock at Night; in the 22d year of his Age. Here William French his body lies. For Murder his blood for Vengeance cries. King Georg the third his Tory crew tha with a bawl his head Shot Threw. For Liberty and His Countrys Good, he Lost his Life his Dearest blood." French's original headstone still stands in the Old Westminster Cemetery, near the mausoleum, though the state of Vermont erected a large monument to both French and Houghton in 1873. A somber but powerful display piece memorializing the human toll of the American Revolution and the anti-royal sentiments of the colonists. Seller Inventory # WRCAM54576

Title: GRAVESTONE RUBBING OF THE HEADSTONE OF ...