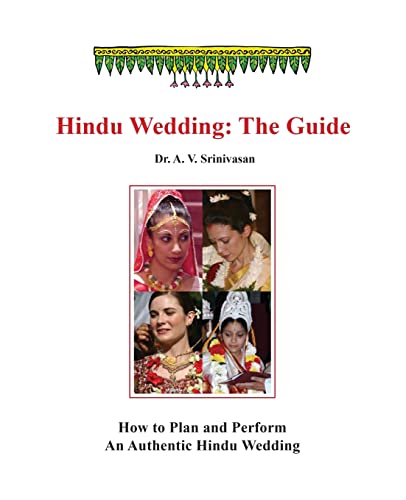 A complete Hindu wedding ceremony, this revised edition includes the words to speak, and what they mean; the steps to take, and how to take them; all the basic materials; Sanskrit alphabet, transliteration and complete English translations. A solution for contemporary Hindu couples in the West, the book includes a complete ceremony that incorporates all the prescribed Vedic wedding rituals.

Dr. Amrutur Venkatachar Srinivasan, has functioned as a Hindu priest for four decades performing a wide variety of Hindu religious ceremonies of worship, weddings, housewarmings, and bhajans or kirtans. He has written extensively on Hinduism. Dr. Srinivasan's most recent publication (2011) is Hinduism for Dummies. His publication, The Vedic Wedding: Origins, Tradition and Practice, is widely acclaimed and won the USA Book News 2007 Best Book Award in the category of Eastern Religions. With a contemporary format for Vedic (Hindu) weddings which retains all essential Vedic rites in an hour long ceremony, he has blended this approach with those of other creeds in many interfaith weddings. In addition, he has published a series of booklets on How to Conduct Puja to ..... providing simple set of instructions to perform a worship ceremony to Soorya (Sun god), Shiva, Rama, Krishna, Ganapati, Durga, Lakshmi, Saraswati and the Navagrahas (nine planets).

A popular writer and speaker, Dr. Srinivasan has published/presented numerous papers on a variety of cultural, social and religious issues in the U.S. and India. He has given courses on the classical literature of India at the University of Connecticut and Wesleyan University. Principal founder member of the Connecticut Valley Hindu Temple Society in 1979, he also founded the Raga Club of Connecticut in 2006.