Items related to Big Trouble : A Murder in a Small Western Town Sets... 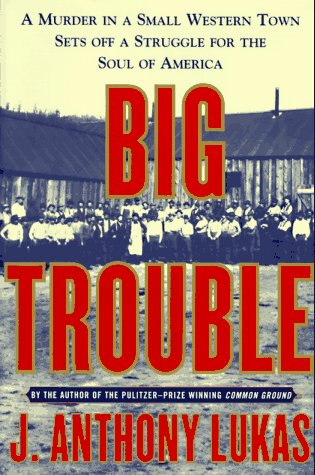 Big Trouble : A Murder in a Small Western Town Sets off a Struggle for the Soul of America

Quantity: 1
View all  copies of this book
Buy Used
Price: US$ 13.00 Convert Currency
Shipping: US$ 4.00 Within U.S.A. Destination, rates & speeds
Add to basket

Title: Big Trouble : A Murder in a Small Western ...

Recounts the trial of a radical union leader for the murder of Idaho's former state governor, a case that ultimately involved President Theodore Roosevelt and the tumultuous relationship between capital, labor, and the law in the 1900s. 100,000 first printing. Tour.

In June 1997, just months before publication of his latest book, Big Trouble, Pulitzer-winning journalist J. Anthony Lukas killed himself. He was 64 and, according to many accounts, had finally surrendered to a lifelong despair over what he saw as his inability to meet his own exceedingly high literary standards.

Yet in reading Big Trouble, a gripping account of murder and politics in turn-of-the-century Idaho, one can't help but think that Lukas was far too hard on himself. His last work is a well-told tale of the struggle between labor and capitalists in the West at a time when entire state legislatures were effectively owned by corporate interests and America teetered on the brink of open class warfare.

The story begins with the 1905 assassination of Frank Steunenberg, an ex- governor of Idaho. His murder was rumored to be the work of vengeful labor bosses, and Pinkerton detective James McParland tracked Wobbly organizer Big Bill Haywood all the way to Colorado to bring him back to stand trial, where he and two other men were defended by a team of lawyers that included Clarence Darrow.

During the writing of Common Ground, his account of Boston's painful process of school desegregation in the 1970s, Lukas became intrigued by what he called race's "twin issue": class. "The more I delved into Boston's crisis," he writes in the foreword to Big Trouble, "the more I found the conundrums of race and class inextricably intertwined." Class simply wasn't as overt an issue as race in contemporary society. What Lukas needed was a time and place where class and class struggle were open and visible. He found it in Idaho in 1905, a time of change and uncertainty, when any notion of a large American middle class was still a distant dream. In order to make this era comprehensible to modern readers, Lukas has gone great lengths in Big Trouble to re-create the entire social, political, and economic context of the murder trial. Here are the histories not simply of mining, railroads, and unions, but of detectives, "modern" journalism, baseball, land speculation, and frontier-town boosterism. In its capacity to translate historical facts into an engrossing, insightful read, Big Trouble stands as a final testament to Lukas's well-deserved reputation as a top reporter of America's growing pains.