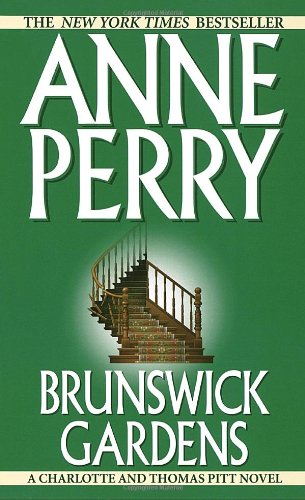 this paperback is in very good condition like new. Seller Inventory # ABE-266937232

In London's affluent Brunswick Gardens, the battle over Charles Darwin's revolutionary theory of evolution intensifies as the respected Reverend Parmenter is boldly challenged by his beautiful assistant, Unity Bellwood--a "new woman" whose feminism and aggressive Darwinism he finds appalling.

When Unity, three months pregnant, tumbles down the staircase to her death, superintendent Thomas Pitt is virtually certain that one of the three deeply devout men in the house committed murder. Could it have been the Reverend Parmenter, his handsome curate, or his Roman Catholic son? Pitt and his clever wife, Charlotte, refuse to settle for less than the truth--and justice. . . .

Among Anne Perry's other novels featuring Thomas and Charlotte Pitt are Pentecost Alley, Traitors Gate, The Hyde Park Headsman, Highgate Rise, and Ashworth Hall, which was a Main Selection of the Book-of-the-Month Club. She also writes the popular novels featuring investigator William Monk, including A Breach of Promise, The Silent Cry, a Main Selection of the Mystery Guild, Weighed in the Balance, Cain His Brother, and Defend and Betray. "Her grasp of Victorian character and conscience still astonishes,  said The Cleveland Plain Dealer about the author. Hundreds of thousands of readers agree.