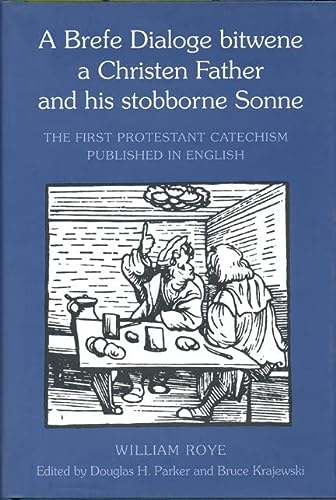 A Brefe Dialoge Bitwene a Christen Father and His Stobborne Sonne: The First Protestant Catechism Published in English

Quantity: 1
View all  copies of this book
Buy Used
Price: US$ 37.90 Convert Currency
Shipping: US$ 3.00 Within U.S.A. Destination, rates & speeds
Add to basket

This is a new, critical edition of William Roye's A Brefe Dialoge bitwene a Christen Father and his stobborne Sonne, which was, in 1527, the first Protestant catechism to be published in English, and which represented the first to provide an extended and detailed statement of the new reformed doctrine in the vernacular. It was thus enormously influential on English Reformist thought, outlining a combination of doctrines that were to appeal to English reformers for decades to come. The Brefe Dialoge electrified the spiritual imagination of English-speaking reform-minded believers as intensely as Tyndale's 1526 English New Testament.

The introduction carefully establishes the historical, religious, social, and cultural contexts out of which the work was born. It also provides details about Roye's life, other works, and commitment to the Reformist cause. The text of the catechism is accompanied by an extensive and detailed commentary that provides readers with clear readings for difficult passages, establishes a theological context for ideas expressed in the text, provides analogous readings from other early Reformation tracts, and glosses all the biblical citations and allusions.

The Brefe Dialoge will be of value to students and scholars interested in the history, theology, and literature of the early English Reformation period.

Bruce Krajewski is Associate Professor of English at Laurentian University.

Douglas H. Parker is a professor emeritus in the Department of English at Laurentian University.