Items related to On Being Gay 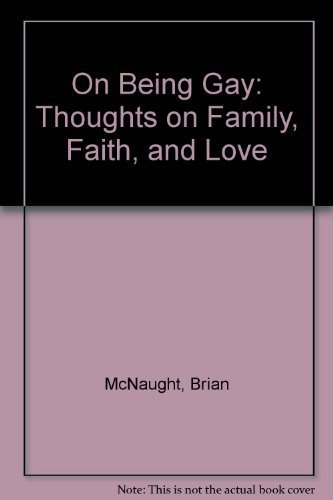 Title: On Being Gay

Brian McNaught is an award-winning writer, sexuality educator, and consultant on the issues facing gay, lesbian, and bisexual people. He has trained several thousand employees of AT&T and Bell Communications Research (Bellcore) on the topic of "Homophobia in the Workplace." Since 1974, Mr. McNaught has spoken at nearly one hundred universities and has produced numerous educational materials on homosexuality and on Acquired Immune Deficiency Syndrome (AIDS). From 1982 to 1984 he served as the Mayor of Boston's liaison to the gay and lesbian community.

Mr. McNaught is the author of the popular book On Being Gay: Thoughts on Family, Faith, and Love (St. Martin's Press, 1988) and is featured in videos "A Conversation with Brian McNaught on Being Gay" and "Gay Issues in the Workplace: Gay, Lesbian, and Bisexual Employees Speak for Themselves with Brian McNaught" (TRB Productions, 1986, 1993). He received his degree in journalism from Marquette University in 1970. A native of Detroit, Mr. McNaught now resides in Atlanta, Georgia.