Items related to Tranquillitas Ordinis: The Present Failure and Future... 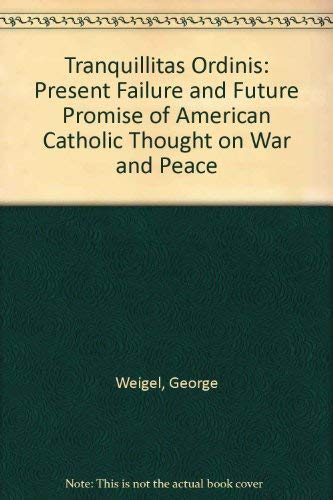 Tranquillitas Ordinis: The Present Failure and Future Promise of American Catholic Thought on War and Peace

Quantity: 1
View all  copies of this book
Buy Used
Price: US$ 5.75 Convert Currency
Shipping: US$ 5.00 Within U.S.A. Destination, rates & speeds
Add to basket

This widely-praised, extensively-documented, and highly controversial volume presents the first comprehensive, critical analysis of American Catholic thought on war and peace. George Weigel begins with a survey of American Catholicism's complex heritage of moral reasoning on war, peace, and political community. Offering a major reinterpretation of American Catholic history, he demonstrates how the American bishops' development of a theology of democracy in the nineteenth and twentieth centuries enriched the Church's classic and medieval understanding of peace.
Weigel then explores how, over the past generation, American Catholic intellectuals began to abandon their heritage. He analyzes the ideas of seven key figures in the transformation of the American Catholic war/peace debate--Dorothy Day, Gordon Zahn, Thomas Merton, Daniel and Philip Berrigan, James Douglass, and J. Bryan Hehir--and explores the American bishops' recent involvement with nuclear strategy and Central American policy. Weigel's sharply argued study may well set the stage and the agenda for the next round of debate on the role of moral reasoning in U.S. foreign policy.

About the Author:
George Weigel is President of the James Madison Foundation in Washington, D.C. and Editor of American Purpose. He served as Scholar-in-Residence at the World Without War Council of Greater Seattle from 1977-1984 and before that as Assistant Professor of Theology at St. Thomas Seminary from 1975-1977.