Items related to The Lord of the Rings: The Two Towers: Visual Companion 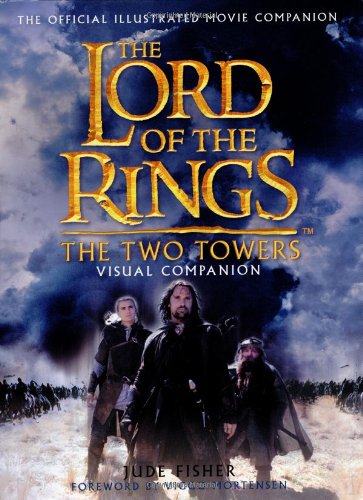 The Lord of the Rings: The Two Towers: Visual Companion

Quantity: 1
View all  copies of this book
Buy Used
Price: US$ 11.05 Convert Currency
Shipping: US$ 4.50 Within U.S.A. Destination, rates & speeds
Add to basket

"A full-color guide to the characters, places and landscapes of J. R. R. Tolkien's Middle-earth as depicted in the second film in the Lord of the Rings trilogy, and features a special introduction by Viggo Mortensen, who plays Aragorn." Tall color pictorial boards, illustrated endpapers, 63+ pp., lavishly illustrated with more than 100 full-color photographs and an exclusive fold-out battle plan of Helm's Deep. Minimal shelf wear, bright and clean throughout, tight binding. An edge tear on the rear panel has been repaired but otherwise, the jacket is attractive. Seller Inventory # 006055

The official, fully authorized companion to the second part of Peter Jackson's award-winning trilogy, The Lord of the Rings.

The Two Towers Visual Companion is a full-color guide to the characters, places and landscapes of J.R.R. Tolkien's Middle-earth as depicted in the second film in The Lord of the Rings Trilogy, and features a special introduction by Viggo Mortensen, who plays Aragorn.

Lavishly illustrated with more than 100 full-color photographs, including exclusive images of Gollum, Treebeard and the battle of Helm's Deep, The Two Towers Visual Companion offers a privileged tour through the principal events of the second film. It begins with a recounting of The Fellowship of the Ring, and then takes the reader on the separate journeys undertaken by the Fellowship in The Two Towers.

The Captives' Journey: in which Merry and Pippin are carried by the fearsome Uruk-hai towards a fateful encounter with the wizard, Saruman, at the stronghold of Isengard.

The Companions' Journey: in which Aragorn, Legolas and Gimli pursue the abducted hobbits across the Plains of Rohan and into the eaves of Fangorn Forest.

Also included are a brand new map of Rohan and Gondor and a specially commissioned battle plan of the climactic events at Helm's Deep, where a brave stand will be made by the Free Peoples of Middle-earth against Saruman's horde.

The companion offers an unforgettable tour of the haunted swamp of the Dead Marshes and the lovely but dangerous land of Ithilien which borders Mordor, the breathtaking kingdom of Rohan, home of the Horse-lords, its seat of power, Edoras, and the ancient stronghold of Helm's Deep, and provides an invaluable introduction to Peter Jackson's The Two Towers.

Jude Fisher, who lives in England, is the pseudonym of an established fantasy author with expertise in Tolkien's novels.

J.R.R. Tolkien was born on January 3, 1892. After serving in the First World War, he embarked upon a distinguished career as a professor of Anglo-Saxon at Oxford University. He is the renowned creator of Middle-earth and author of the great modern classic, The Hobbit, the prelude to his epic masterpiece, The Lord of the Rings. Other works by J.R.R. Tolkien include The Silmarillion. J.R.R. Tolkien died in 1973 at the age of 81.