Items related to The Second City: Backstage at the World's Greatest... 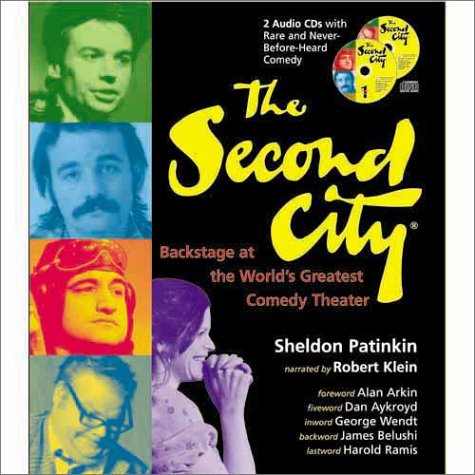 The Second City: Backstage at the World's Greatest Comedy Theatre

Title: The Second City: Backstage at the World's ...

"The entire recent tradition of American theatrical satire can be summed up in three words: The Second City."
--New York Times

Many of comedy's biggest stars cut their teeth at The Second City. Learn all of the backstage details--the laughs, loves, struggles, successes, fights and failures that have made Second City such a fertile ground for comedy over the years. And hear Second City's most outrageous and hilarious live performances on two audio CDs narrated by Robert Klein.

Hear:
--John Belushi try to bluff his way through an oral exam to avoid the draft
--Mike Myers as a Canadian border guard who "closes" Canada
--Bonnie Hunt singing "Up, Up And Away" as an annoying "on-hold" entertainer
--John Candy playing Dan Aykroyd's rebellious, hockey-hating son

And read about:
--Bill Murray demonstrating the proper way to deal with a heckler
--Alan Arkin's pre-Second City days as a troubadour with The Tarriers
--Where Gilda Radner first came up with "Emily Litella"
--How Second City alum Martin Short "discovered" Mike Myers

Since 1959, The Second City has been producing cutting-edge satire and wickedly funny improvisation, while keeping countless individuals of questionable character off the streets for a couple of hours each night. It has also trained thousands of young performers in the art of improv-based theater.

Author Sheldon Patinkin, one of Second City’s founding fathers, tells the story of Second City like no else can--with rare photos, profiles and backstage stories you were never supposed to hear. The Second City is both funnier and more poignant than you could have imagined. The book includes two full-length audio CDs containing hilarious classic scenes like:
--"Football Comes to the University of Chicago" (with Alan Arkin and Severn Darden)
--"Brest Litovsk" (with John Belushi and Joe Flaherty)
--"Motivational Speaker" (with Chris Farley, Tim Meadows and Bob Odenkirk)

Plus new, never-before-heard material that will leave your sides aching.

Beginning as a hundred-seat cabaret on Chicago's North Side, The Second City has grown into a comedy empire. It now boasts resident theatres in Chicago, Toronto, Detroit and Cleveland; five touring troupes that bring Second City comedy worldwide; a training center with enrollment of more than 2,500 students a year; Second City Communications, a division that brings comedy into the corporate sector; and film and television pursuits that have included the classic television series, SCTV.

Sheldon Patinkin has been part of The Second City family since the first seeds were planted at the University of Chicago in the early 1950s. He was a member of the Playwrights Theatre Club (a predecessor to Second City) and was one of Second City's first directors, getting handed the job when Paul Sills stormed out of the theater in 1963, saying, "See what you can do with them, Sheldon." He has remained a part of Second City in Chicago and Toronto as director, teacher, advisor and an associate producer for SCTV. He currently serves as Second City’s artistic consultant. Sheldon has been a theater director and teacher of improv in Chicago, Toronto and New York, as well as co-writing several screenplays and teleplays. He's even acted in a few commercials (for the money). Sheldon earned an M.A. in English literature from the University of Chicago before devoting himself to Second City full-time. He is now the chair of the Theater Department at Columbia College Chicago, the director of Steppenwolf Theatre’s summer workshops and the acting faculty of the Chicago Lyric Opera Center for American Artists.

Robert Klein is a native of the Bronx who earned a B.A. from Alfred University and went on to study drama at Yale. He debuted at The Second City in 1965 with a cast that included David Steinberg and Fred Willard. This led to roles on Broadway such as The Apple Tree and They're Playing Our Song (for which he earned a Tony nomination). He won an Obie for his performance in The Sisters Rosensweig. Robert achieved national recognition as a comedian, releasing four albums, two of which received Grammy nominations, and starring in seven HBO concert specials. He has acted in several films, including The Owl and the Pussycat, Hooper and Primary Colors, and appears regularly on such TV shows as The Tonight Show with Jay Leno and Late Night with David Letterman. He was a regular on the series Sisters and has guest starred on many sitcoms, including Mad About You and King of Queens. He has also hosted Saturday Night Live twice and starred in the original "Cheeseburger" sketch with John Belushi and Dan Aykroyd.