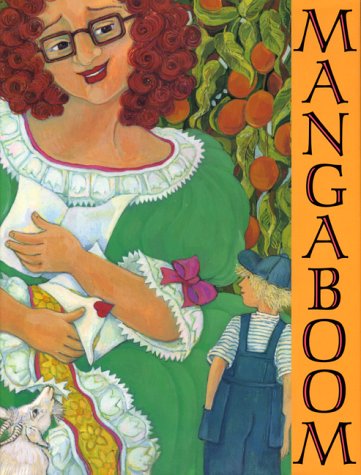 SIGNED. This is a First Edition hardcover book in a dust jacket. The book is inscribed (to Spencer) , dated (1997) , and signed by Anita Lobel (in New York) . She as drawn a large shoe, flowers, and a note in the shoe addressed to Spencer. The book is tight, bright, crisp, clean. No marks or writing. The dust jacket is equally crisp and clean. The price is present - not clipped. Gift Condition. Appears to be unread. ; 4to; Signed by Illustrator. Seller Inventory # 7250

Daniel is walking in the woods one day when he comes upon the biggest mango tree he's ever seen. But even more amazing is it occupant, a lady giant named Mangaboom. She's nineteen feet tall. She speaks Spanish and English. She like to skinny-dip and turn cartwheels on the beach.

"Holy mo," Daniel says. He's never met a giant before, much less one as fabulous as Mangaboom. As it turns out, Daniel and his new friend have a lot in common--which is more than Mangaboom's three bumbling gentlemen suitors can say.

Here is a story as charming and larger-than-life as Mangaboom herself. Equally captiviating are the exquisite painting for this original tale.Daniel befriends a gentle giant who lives in a mango tree. As it turns out, Daniel and his nineteen-foot-tall friend have a lot in common--which is more than Mangaboom's three bumbling gentleman suitors can say. An original story with the flavor of a Puerto Rican folktale, with spectacular paintings by the Caldecott honor medalist.