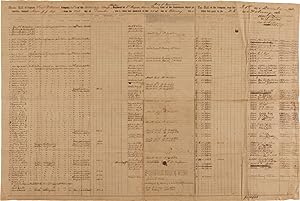 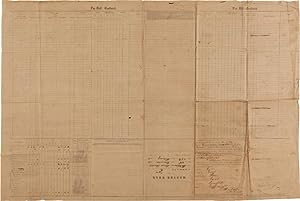 Printed form, approximately 24 x 36 inches, completed in manuscript. Folded. Light wear and a few small separations along folds. Slightly wrinkled at right edge. Moderate tanning, scattered foxing. Still very good. A rare example of a Civil War muster roll for a Confederate unit. This roll is for for Company E of the 2nd Battalion Georgia Sharpshooters, commanded by Maj. J.J. Cox, as they mustered on Feb. 28, 1863, near Chattanooga, shortly after the battle of Fort Donelson. Although it was a Georgia Battalion, the vast majority of men in Company E were from Montgomery, Alabama. As a part of Gen. J.K. Jackson's Brigade in the Army of Tennessee, the unit fought at Murfreesboro, Chickamauga, and Missionary Ridge, and later as a part of Gen. Gist's Brigade participated in the battle for Atlanta and Hood's Tennessee operations. The roll lists all officers and enlisted men, records two deaths in the company, a number of absentees through sickness and desertion, and even notes two instances of substitution. Civil War soldier substitutions were a controversial tactic in which men of means bought their way out of service. A fine copy of a scarce Confederate military document. Seller Inventory # WRCAM54505