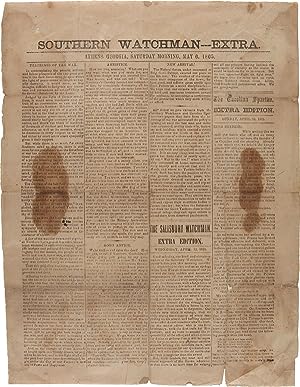 Broadside, 15 1/2 x 11 3/4 inches. Minor edge wear, some toning and spotting, two small dark stains, old folds. Overall good condition. An interesting broadside newspaper extra concerning the Union occupation of Athens, Georgia at the end of the Civil War. The paper was printed nearly a month after the Army of Northern Virginia surrendered, and ten days or so after Gen. Joseph Johnston surrendered to Sherman the Confederate forces active in the Carolinas, Georgia, and Florida. The first two columns include passages on "Teachings of the War," "Armistice," and "Good Advice." Each of these articles struggle to find meaning in the end of the recent conflagration, providing an important glimpse into the minds of the Southern sympathizers. The third column begins: "New Arrival! The Federal forces, under command of Brig. Genl. Palmer, entered our place on the 4th inst. The conduct of the troops since their occupation of the town, has been good, and reflects great credit upon Genl. Palmer as a strict disciplinarian. We hope that our citizens will endeavor by kind and courteous treatment toward the soldiery, to encourage a continuance of the protection which they seem willing to afford." The editors of the SOUTHERN WATCHMAN argue for peaceful acceptance of the Reconstructionist Union forces, and mince no words in their harangue on other Southern newspapers calling for the continuation of the War: "Below we give extracts from the SALISBURY WATCHMAN and CAROLINA SPARTAN - two papers that have from the beginning of the war advocated the policy of fighting on until the last man and dollar were exhausted, and by their vile, traitorous and insidious words exerted a strong influence over the minds of the South and thousands of widows and orphans who are now suffering every privation and horror connected with the war, can attribute them to the false and unscrupulous arguments set forth and spread out in these papers. It is an easy thing, and one that requires but little valor or manly spirit, to cry out 'War to the last!' when comfortably ensconced at home surrounded by every luxury and comfort that civil life affords, and where no Yankee bullets can reach. Such has been the position of those who govern the Southern press, who keeping their devoted carcasses at a respectable distance in the rear, still cry out for more lives to sacrifice and more money to squander, to enable them to secure a foundation for their weak and rotten Confederacy to stand upon." The paper then quotes a long passage from each of these other newspapers. The editors of the SALISBURY WATCHMAN call for armed resistance before reporting that they themselves are preparing to "leave you for some spot on earth where Yankees cannot come." The CAROLINA SPARTAN incites the people to lay their lives "on the altar of Southern independence" before insisting in the last sentence that "[we] advise our friends to refrain from hostilities." A rare broadside relating to the delicate psychological condition and tenuous state of feelings among groups of Southerners who have been forced to realize that the fight for the Confederacy is over, and they have lost. Seller Inventory # WRCAM53477