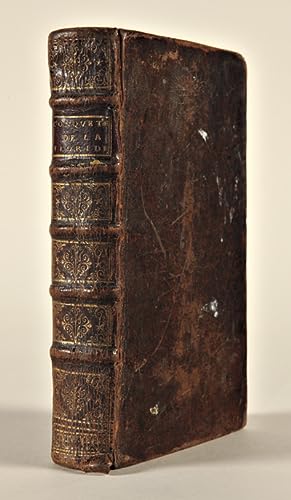 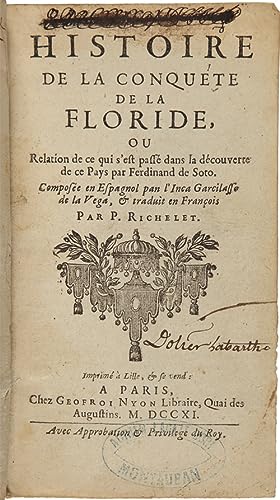 [18],281,[3],249,[11]pp. Second part with separate titlepage. 12mo. Contemporary calf, ornate gilt spine, raised bands, gilt maroon morocco label. Crossed-out contemporary ownership signature on titlepage and verso of front free endpaper, old institutional stamp also on titlepage. Later manuscript note tipped in at front. Overall internally clean. Very good. Later French edition, after the Lisbon first of 1605 and the first French of 1670, of Garcilaso de la Vega's great work on De Soto and the aborigines of Florida. The author, the extraordinary half-Incan historian, obtained a great portion of the material contained in this work directly from a member of De Soto's ill-fated expedition, as well as from two manuscripts of unquestioned authority written by two other members of the expedition. Although for a period of the 19th century Garcilaso de la Vega's three great works on the conquests of Peru and Florida were subject to skepticism on the part of some historians, time and further scholarship have established their authenticity, and this publication is now regarded as one of the primary works on the events with which it deals. The text concerns De Soto's forays into Florida, Alabama, Georgia, and even as far west as Arkansas. See Field for a good discussion of Garcilaso de la Vega's life and works. One of the primary early American histories. PALAU 354839. EUROPEAN AMERICANA 711/83. SABIN 98748. SERVIES 264 (another ed). FIELD 587 (another ed). CLARK I:8 (ref). Seller Inventory # WRCAM31045