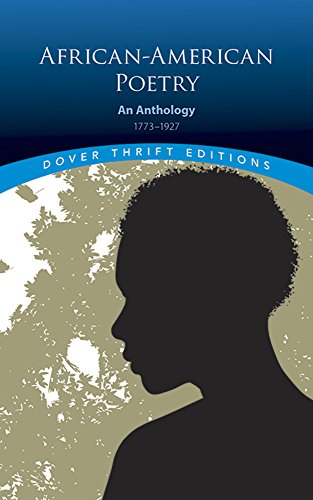 Quantity: 16
View all  copies of this book
Buy New
Price: US$ 6.03 Convert Currency
Shipping: US$ 13.44 From United Kingdom to U.S.A. Destination, rates & speeds
Add to basket

In the 19th century, abolitionist and African-American periodicals printed thousands of poems by black men and women on such topics as bondage and freedom, hatred and discrimination, racial identity and racial solidarity, along with dialect verse that mythologized the Southern past. Early in the 20th century, black poets celebrated race consciousness in propagandistic and protest poetry, while World War I helped engender the outpouring of African-American creativity known as the "Harlem Renaissance."
The present volume spans this wealth of material, ranging from the religious and moral verse of Phillis Wheatley Peters (ca. 1753–1784) to the 20th-century sensibilities of Langston Hughes and Countee Cullen. Also here are works by George Moses Horton, Frances Ellen Watkins Harper, Alberry Alston Whitman, Henrietta Cordelia Ray, Daniel Webster Davis, Mary Weston Fordham, James Weldon Johnson, Paul Laurence Dunbar, and many more.
Attractive and inexpensive, this carefully chosen collection offers unparalleled insight into the hearts and minds of African-Americans. It will be welcomed by students of the black experience in America and any lover of fine poetry.

The Saint Bookstore has a range of over 1 million titles available.


Please order through the Abebooks checkout. We only take orders through Abebooks - We don't take direct orders by email or phone.

Refunds or Returns: A full refund of the purchase price will be given if returned within 30 days in undamaged condition.

As a seller on abebooks we adhere to the terms explained at http://www.abebooks.co.uk/docs/HelpCentral/buyerIndex.shtml - if you require further assistance please email us at orders@thesaintbookstore.co.uk


Most orders usually ship within 1-3 business days, but some can take up to 7 days.