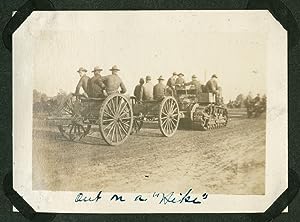 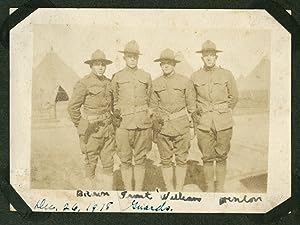 Contemporary black cloth photograph album with over 100 mounted silver-gelatin photographs. Minor shelf wear. A few loose photographs. Very good. An interesting vernacular photograph album of a young American's life in the early 20th century. The compiler of the album served with the 36th Artillery Regiment, and trained at Camp McClellan in Alabama, of which there are almost fifty photographs present here. Additionally, most of the photographs are annotated in ink, identifying the soldiers in the photographs, the settings and locations, and the activities in the pictures. The photographs include tanks, a gas mask, a brownie gun, and three shots of an African- American soldier or staffer. Numerous images capture the training in progress, with the soldiers "out on a hike" while they "prepare for action, guns set, ready for loading," and more. One image depicts a simple Alabama farm, and is captioned in manuscript, "Alabama scene." The remainder of the album is devoted to the young man's life in Indiana, with numerous shots of farm life and prairie land, and including a trip to a cabin in Morgan County. These shots are not annotated, but provide an important peek into rural life in the Midwest during the early 20th century. Seller Inventory # WRCAM54314