Items related to Outlaw Machine: Harley Davidson and the Search for... 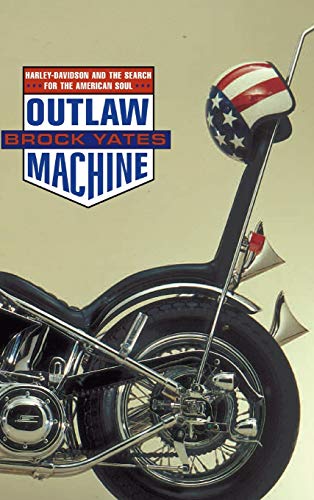 Outlaw Machine: Harley Davidson and the Search for the American Soul

Outlaw Machine is the story of one of America's most enduring cultural icons. It tells the definitive history of Harley-Davidson motorcycles and their place in America's history.

The Harley-Davidson motorcycle, writes Brock Yates, is a quintessentially American machine: "flawed but honest and forthright, bombastic and audacious like the nation that produced it." Anyone who has pulled off the road to let a pack of Hells Angels roar by, or who has watched an executive trade in his Rolex for leather chaps and a custom Softail, also knows that the allure of the Harley is its rebellious, bad-guy mystique. In Outlaw Machine, Yates sets out to document the history of Harley-Davidson, as a company and as a symbol that helped create--and now sustains--American motorcycle culture.

What Yates gives us, in prose that aims for the sound and fury of his subject but sometimes suffers from a lack of agility, is a modern American success story--"the long ride of the Harley-Davidson into the mainstream." It is the story of how the Harley became the vehicle of choice for rebels and outlaw bikers; how the company distanced itself from this media-enhanced, antiestablishment image as it suffered the onslaught of Japanese imports; how the company stumbled, close to bankruptcy, into the '80s when it realized that the hard-core biker contingent exhibited unequaled brand loyalty. "If this rebelliousness, this sheer vitality and off-the-wall lust for the elemental life could somehow be tapped to offset the seamless onslaught of the Japanese, perhaps ... Harley-Davidson could survive."

Harley-Davidson has capitalized on its "reputation of veiled menace" to establish a marketing niche for the record books, and its classically styled, gleaming machines have become one of the most sought-after status symbols of the '90s. Yet Yates suggests that the Harley's power transcends the mainstream's co-option of its renegade image. "If that rumble, that ungodly roar, that death threat to collectivism and convention dies away, it will be time to turn out the lights." --Svenja Soldovieri