Items related to Shipwreck at the bottom of the world: The extraordinary...

Home Armstrong, Jennifer Shipwreck at the bottom of the world: The extraordinary true ...
Stock Image 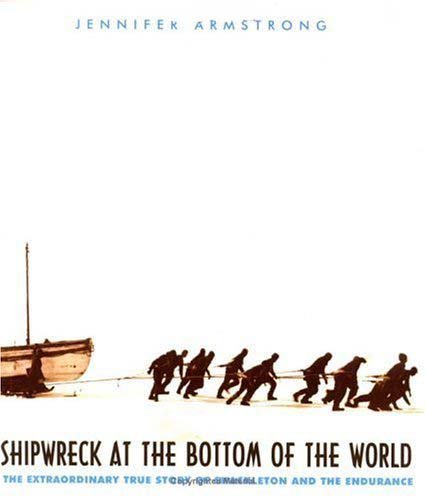 Shipwreck at the bottom of the world: The extraordinary true story of Shackleton and the Endurance

Association Member:
Quantity: 1
View all  copies of this book
Buy Used
Price: US$ 5.00 Convert Currency
Shipping: US$ 6.00 Within U.S.A.
Save on shipping

Title: Shipwreck at the bottom of the world: The ...

The harrowing story of the ill-fated Endurance, now in paperback.

In August 1914, Ernest Shackleton and 27 men sailed from England in an attempt to become the first team of explorers to cross Antarctica from one side to the other. Five months later and still 100 miles from land, their ship, Endurance, became trapped in ice. The expedition survived another five months camping on ice floes, followed by a perilous journey through stormy seas to remote and unvisited Elephant Island. In a dramatic climax to this amazing survival story, Shackleton and five others navigated 800 miles of treacherous open ocean in a 20-foot boat to fetch a rescue ship.

Shipwreck at the Bottom of the World vividly re-creates one of the most extraordinary adventure stories in history. Jennifer Armstrong narrates this unbelievable story with vigor, an eye for detail, and an appreciation of the marvelous leadership of Shackleton, who brought home every one of his men alive.

The harrowing survival story of English explorer Sir Ernest Shackleton and the ill-fated Endurance has intrigued people since the 1914 expedition--spurring astounding books such as Endurance: Shackleton's Incredible Voyage and The Endurance: Shackleton's Legendary Antarctic Expedition. As Shackleton and 27 sailors attempted to cross the frozen Antarctic continent from one side to the other, they were trapped in an ice pack, lost their ship to the icy depths, survived an Antarctic winter, escaped attacks from sea lions, and traversed 600 treacherous miles to the uninhabited Elephant Island. Leaving 22 men behind, Shackleton and five others sailed 800 miles across the southern Atlantic Ocean in a 20-foot open boat to tiny South George Island, where they hiked across unmapped mountains to a whaling station. In 1916, 19 months after the Endurance became icebound, Shackleton led a rescue party back to retrieve his men. Remarkably, every crew member survived.

Jennifer Armstrong, the award-winning author of Black-Eyed Susan and The Dreams of Mairhe Mehan, brings the unbelievable journey to life with delicious details: how a handsome young stowaway was discovered too late to cast him off; how the ship itself would become frost-white, looking like "another species of sparkling white iceberg as it nosed its way through the pack;" and how the ice-pack-dwelling Emperor penguins seemed to enjoy the banjo music of crew member Leonard Hussey. The true-to-life story is as thrilling as they come, and Armstrong's lively, crystal-clear writing style is just as compelling. More than 40 photographs of the expedition populate this inspiring nonfiction adventure story that young readers will devour from cover to cover. (Ages 10 to 14) --Karin Snelson