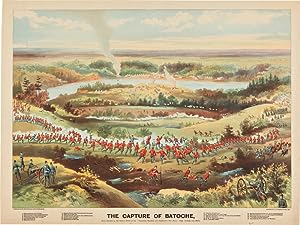 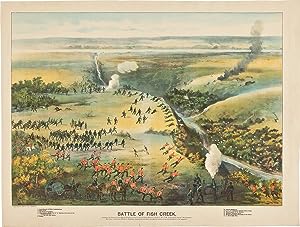 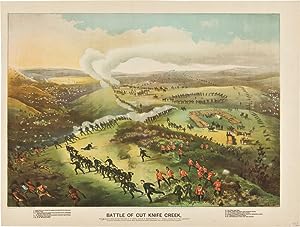 THREE HANDSOME COLOR LITHOGRAPHS DEPICTING THREE OF THE MOST IMPORTANT BATTLES DURING THE NORTH-WEST, OR SECOND RIEL REBELLION]

Three color lithographs. Cut Knife and Fish Creek: approximately 20 1/4 x 26 3/4 inches; Capture at Batoche: approximately 19 1/2 x 26 1/4 inches. Cut Knife and Fish Creek trimmed about 3/4 inch along the top margin and about 1 1/4 inches along left margin. Capture at Batoche trimmed slightly more but evenly in each margin and adhered to backing board. Overall good plus. A trio of rare battlefield views depicting three of the major skirmishes fought during the North-West Rebellion in Saskatchewan in 1885. This series of battles is also known by several other names, including the Saskatchewan Rebellion, the Northwest Uprising, and the Second Riel Rebellion (the first Riel Rebellion occurred near Manitoba in 1869 and is also known as the Red River Rebellion). Both the 1869 and 1885 actions were led by Louis Riel, the leader of the Métis people. Chronologically, the lithographs are as follows: 1) "Battle of Fish Creek." This battle occurred on April 24, 1885 and resulted in a stunning victory when around 200 Métis soldiers overcame a superior force of 900 government soldiers, and temporarily halted an advance on Batoche. 2) "Battle of Cut Knife." On May 2, 1885 a force of Cree warriors held off a superior group of Canadian army units. 3) "The Capture of Batoche." Effectively the end of the rebellion, the Métis were soundly defeated in the second week of May after they ran out of ammunition on the third day of fighting. This action forced Riel to surrender on May 15. The Métis are one of the recognized aboriginal groups in Canada who trace their roots to the first interaction between First Nations people and the earliest European settlers, usually French, and largely as a result of the fur trade. The Métis are among the earliest mixed-race people in Canada, and developed a separate, distinct culture based on their ancestral origins, usually stemming from the coupling of an indigenous woman and a male European settler. By the 19th century the Métis were well- assimilated into French-Canadian culture, and many worked as fur traders for the North-West Company or Hudson's Bay Company, or supplied furs as independent trappers. When those companies pulled out of the Red River and Saskatchewan regions in the mid-to-late 1800s, the Canadian government took over the land and began to enforce their will on the Métis people. The first armed conflict between the Métis and the Canadian provincial government occurred in 1869 in the Red River region, where Louis Riel led an unsuccessful rebellion. Some fifteen years later the Métis formed their own provincial government in western Saskatchewan after hearing that the Canadian government was sending mounted police to enforce Canadian law in the region. This Second Riel Rebellion occurred in a series of skirmishes between the Métis and the Canadian armed forces between March 26 and May 12, 1885. Though led by Louis Riel, the Métis ultimately lost again to the Canadian government. Still, both rebellions helped the Métis gain some measure of recognition and respect from the Canadian government that they would very likely not have earned otherwise. The lithographs were produced by the Toronto Lithographing Company, purveyors of patriotic views of famous Canadian wars. In this case, the company assigned W.D. Blatchly to paint the scenes for the 1885 conflicts; Blatchly was, at the time, one of the leading artists in all of Canada. An excellent series of lithographs illustrating three important events in the famous rebellion, with outstanding display appeal. Seller Inventory # WRCAM54034