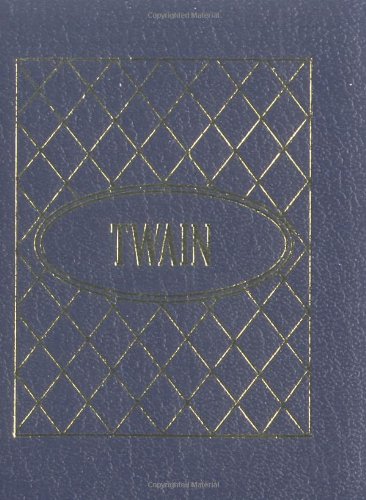 Quantity: 1
View all  copies of this book
Buy Used
Price: US$ 8.50 Convert Currency
Shipping: US$ 4.00 Within U.S.A. Destination, rates & speeds
Add to basket

First Edition this format: printing numerals on the copyright page are a full line beginning with 1. Quite small hardbound (3.25 inches tall). Very light wear to the extremities of the binding. No distortion of the book from reading or improper shelving. Pages are tight and clean with no marks. No name of previous owner. No odor. No dust jacket. Size: 48mo - over 3" - 4" Tall. Seller Inventory # MP18-179C-BX

Mark Twain is too well known to tlie public to require a formal introduction at my hands. By his story of the Frog, he scaled the heights of popularity at a single jump, and won for himself the sobriquet of The Wild Humorist of the Pacific Slope. He is also known to fame as The Moralist of the Main ;and it is not unlikely that as such he will go down to posterity. It is in his secondary character, as humorist, however, rather than in the primal one of moralist, that I aim to present him in the present volume. And here a ready explanation will be found for the somewhat fragmentary character of many of these sketches ;for it was necessary to snatch threads of humor wherever they could be found very often detaching them from serious articles and moral essays with which they were woven and entangled. Originally written for newspaper publication, many of the articles referred to events of the day, the interest of which has now passed away, and contained local allusions, which the general reader would fail to understand; in such cases excision became imperative. Further than this, remark or comment is unnecessary. Mark Twain never resorts to tricks of spelling nor rhetorical buffoonery for the purpose of provoking a laugh ;the vein of his humor runs too rich and deep to make surface-gilding necessary. But there are few who can resist the quaint similes, keen satire, and hard good sense which form the staple of his writings. J. P.
(Typographical errors above are due to OCR software and don't occur in the book.)

Forgotten Books is a publisher of historical writings, such as: Philosophy, Classics, Science, Religion, History, Folklore and Mythology.

Forgotten Books' Classic Reprint Series utilizes the latest technology to regenerate facsimiles of historically important writings. Careful attention has been made to accurately preserve the original format of each page whilst

Short story by Mark Twain, first published in The Saturday Press in 1865. The narrator of the story, who is searching for a Reverend Leonidas Smiley, visits the long-winded Simon Wheeler, a miner, in hopes of learning his whereabouts. Wheeler instead relates an elaborate story of a different man named Jim Smiley who was a compulsive and imaginative gambler and who once spent three months training a frog named Daniel Webster to jump and then won money by betting on the frog. The gambler, Wheeler reveals, was eventually duped by a quick-thinking stranger. -- The Merriam-Webster Encyclopedia of Literature