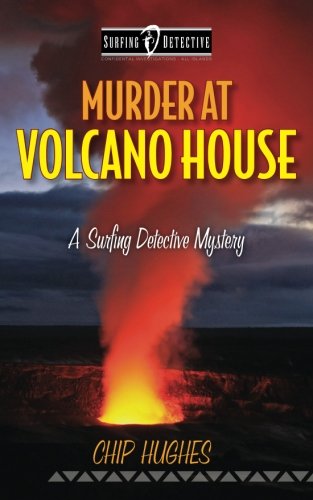 Kai Cooke comes to the Volcano House for his strangest case yet—protecting the CEO of a geothermal venture from the wrath of Pele, legendary goddess of volcanoes. Rex Ransom is here in Hawai‘i Volcanoes National Park to attend the funeral for his second employee to die mysteriously in Pele’s domain. His wife sees a pattern and fears that Rex, having offended Pele by drilling in her sacred rainforest, is next. Kai is not so sure. But his faith in common sense receives a jolt when Ransom turns up in a steam vent, boiled alive. Kai investigates and finds others besides Pele who might want Ransom dead. An ex-wife, a former business partner, an anti-drilling activist, a loony woman who fancies herself Pele’s sister, and more. Did the goddess herself strike down Ransom? Or is the answer closer to home? A quick-paced, vivid, island-hopping ride, Murder at Volcano House gives fans of the Surfing Detective reason to cheer, and fans of Hawai'i—who is not?—a welcome journey to these storied isles.

Chip Hughes earned a Ph.D. in English at Indiana University and taught American literature, film, writing, and popular fiction for nearly three decades at the University of Hawai‘i at Manoa. His non-fiction publications include two books and numerous essays and reviews on John Steinbeck. An active member of the Private Eye Writers of America, Chip launched the Surfing Detective mystery series with Murder on Moloka‘i (2004) and Wipeout! (2007), published by Island Heritage. The series is now published exclusively by Slate Ridge Press, whose volumes include Kula (2011), Murder at Volcano House (2013), and reissues of the first two novels. Chip and his wife Charlene split their time between homes in Hawai‘i and upstate New York.

With 3 stores less than 1 hour outside the DC/Metropolitan area (1 in Gaithersburg, 1 in Frederick and 1 in Hagerstown, MD), we have the largest selection of books in the tri-state area. Wonder Book and Video has been in business since 1980 and online since 1997. We have over 1 Million books for sale on our website and another 1 Million books for sale in our 3 locations. Items on Abe are not necessarily in stock at our retail locations. Please do not call the stores to place orders for Abe Books sales. We have a very active online inventory and as such, we can receive multiple orders for the same item. We fill those orders on a first come first serve basis, but will refund promptly any items that are out of stock. Since 1980 it has always been about the books. ALL kinds of books from 95 cent children's paperbacks to five figure rare and collectibles. A merging of the old and new is where we started, and it is where we are today. Our retail stores have always been places where a reader can rush in looking for a title needed for a term paper that is due the next day, or where bibliophiles can get lost "in the stacks" for as long as they wish. In 2002 USAToday recognized us as "1 of 10 Great Old Bookstores", and we have been featured in numerous other newspaper and TV stories including Washington Post and CSpan. Members ABAA, ILAB.

RETURNS are cheerfully accepted up to 30 days. We ship out within 1-2 business days and U.S. Standard Shipments usually arrive within 6-9 business days, Priority 3-6. We want you to be satisfied with the book you order. Our general description is conservative and the book should be as good or better than our general descr...


STANDARD DOMESTIC U.S. SHIPPING IS FREE. Priority Shipping is only $6.99 for first item, $1 each additional. Orders ship within 2 business days. Shipping outside of U.S. is typically between $8-13 and takes between 8-15 business days. Heavier books may require additional shipping. Faster Needs Please Inquire.