Items related to Living in the Light of Death 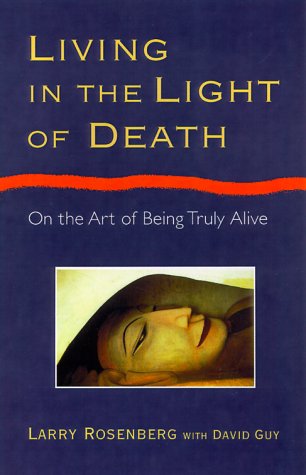 Living in the Light of Death

Title: Living in the Light of Death

This book presents the Buddhist approach to facing the inevitable facts of growing older, getting sick, and dying. These touch realities are not given much attention by many people until midlife, when they become harder to avoid. Using a Buddhist text known as the Five Subjects for Frequent Recollection, Larry Rosenberg shows how intimacy with the realities of aging can actually be used as a means to liberation. When we become intimate with these inevitable aspects of life, he writes, we also become intimate with ourselves, with others, with the world—indeed with all things.

Those aches and pains, that sagging and graying--the booby trap of death is hidden in the undergrowth of the future, but how far into the future? One of the Buddha's great realizations was of the reality of aging and death. As Larry Rosenberg points out, it's not the reality that is the problem but what our minds do with it. One of America's leading meditation teachers, Rosenberg has in his repertoire a time-honored meditation practice: death meditation. In a sense, all Buddhist meditation is about facing impermanence, but death meditation is facing the ultimate impermanence. In Living in the Light of Death, Rosenberg brings forth some of his best anecdotes from his stays in foreign lands (and other painful experiences) to illustrate that aging, illness, and death can not only try us but teach us as well. To meditate on them is to initiate that teaching process. What Rosenberg has realized and tried to pass on to others is that although we cannot avoid the painful or frightening phenomena of the body, they do not have to weigh us down and can instead lend a lightheartedness to living. --Brian Bruya