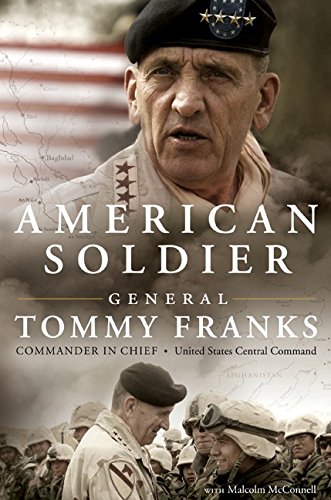 Quantity: 1
View all  copies of this book
Buy Used
Price: US$ 25.00 Convert Currency
Shipping: US$ 5.00 Within U.S.A. Destination, rates & speeds
Add to basket

SIGNED by Tommy Franks on the Dedication page. signature only First edition, First printing. Book is in Very Good + condition. Boards are clean, not bumped. Fore edges have a small amount of reading wear. Interior is clean and legible. Not remaindered. Dust Jacket is in Very Good + condition. Tiny bit of edge wear, tiny bit of crinkle. Not price clipped. Dust Jacket is covered by Mylar wrapper. Thanks and Enjoy. All-Ways well boxed, All-Ways fast service. Thanks. Seller Inventory # 033471

"When war comes, you look for certain special qualities in the people you'll be working with. General Tom Franks embodies those qualities: strength, experience, a keen mind, energy, honor, good humor, and a deep loyalty to his troops and to his country.

The Commander in Chief of the United States Central Command from July 2000 through July 2003, General Tommy Franks made history by leading American and Coalition forces to victory in Afghanistan and Iraq -- the decisive battles that launched the war on terrorism.

In this riveting memoir, General Franks retraces his journey from a small-town boyhood in Oklahoma and Midland, Texas, through a lifetime of military service -- including his heroic tour as an Artillery officer in Vietnam, where he was wounded three times. A reform-minded Cold War commander and a shrewd tactician during Operation Desert Storm, Franks took command of CENTCOM at the dawn of what he calls a "crease in history" -- becoming the senior American military officer in the most dangerous region on earth.

Now, drawing on his own recollections and military records declassified for this book, Franks offers the first true insider's account of the war on terrorism that has changed the world since September 11, 2001. He puts you in the Operations Center for the launch of Operation Enduring Freedom just weeks after 9/11, capturing its uncertain early days and the historic victory that followed. He traces his relationship with the demanding Donald Rumsfeld, as early tensions over the pace of the campaign gave way to a strong and friendly collaboration.

When President Bush focused world attention on the threat of Iraq, Franks seized the moment to implement a bold new vision of joint warfare in planning Operation Iraqi Freedom. Rejecting Desert Storm–style massive troop deployment in favor of flexibility and speed, Franks was questioned by the defense establishment -- including Secretary of State Colin Powell. Yet his vision was proven on the ground: Within three weeks, Baghdad had fallen.

American Soldier is filled with revelation. Franks describes the covert diplomacy that helped him secure international cooperation for the war, and reveals the role of foreign leaders -- and a critical double agent code-named "April Fool" -- in the most successful military deception since D-Day in 1944. He speaks frankly of intelligence shortcomings that endangered our troops, and of the credible WMD threats -- including eleventh-hour warnings from Arab leaders -- that influenced every planning decision. He offers an unvarnished portrait of the "disruptive and divisive" Washington bureaucracy, and a candid assessment of the war's aftermath. Yet in the end, as American Soldier demonstrates, the battles in Afghanistan and Iraq remain heroic victories -- wars of liberation won by troops whose valor was "unequalled," Franks writes, "by anything in the annals of war."

Few individuals have the chance to contribute so much of themselves to the American story as General Tommy Franks. In American Soldier, he captures it all.

As Commander in Chief of the United States Central Command from July 2000 through July 2003, Tommy Franks led the American and Coalition forces to victory in both Afghanistan and Iraq. Unsurprisingly, the portions of American Soldier covering these wars are the most interesting because they combine military maneuvers, political wrangling, and lots of action and commentary. This does not mean, however, that the rest of his autobiography is dull. General Franks's writing is clear and engaging and his insider's perspective is informative and interesting, particularly when he explains how the military moved into the 21st century by emphasizing speed, agility, and better cooperation among the various branches--a significant shift from the first Persian Gulf war just a decade earlier.

In addition to his years as a war general, his memoir also covers his childhood, his early years in the Army, his tours of Vietnam, and how he contemplated retirement before being called up as commander of Central Command, "the most diverse, strategically vital—and unstable—region of the planet." Ever the diplomat, General Franks offers insights, but little criticism of individuals. Other than expressing admiration for his own staff and for President Bush and Defense Secretary Donald Rumsfeld in particular, he is tight-lipped about any conflict within the administration that may have occurred regarding policy issues. (The one exception is counterterrorism specialist Richard Clarke. "I never received a single operational recommendation, or a single page of actionable intelligence, from Richard Clarke," he writes). He also writes that he was surprised by the absence of weapons of mass destruction in Iraq and that no WMDs were used against American troops. Still, the invasion of Iraq was justified in his eyes: "While we may not have found actual WMD stockpiles, what the Coalition discovered was the equivalent of a disassembled pistol, lying on a table beside neatly arranged trays of bullets." American Soldier is a compelling look at the war on terrorism from one who served on the frontlines as both a warrior and a diplomat. --Shawn Carkonen