Items related to The Other Side of Silence: Men's Lives & Gay...

Home John Loughery The Other Side of Silence: Men's Lives & Gay Identities - A ...
Stock Image 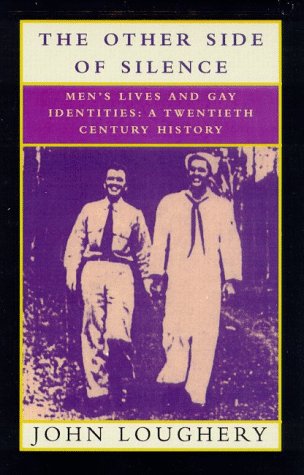 The Other Side of Silence: Men's Lives & Gay Identities - A Twentieth-Century History

507 pp., 12 pp. glossy b&w historical photos. Close to new, no markings or creases. Slight thumbing. A detailed history of gay men's identity and political activity within the United States from 1900 and mostly closeted decades, to the coming-out era in the 1960s and 70s to national political activism in the 1990s. Includes 27 pp. of reference notes, index. A readable blend of scholarship and anecdotal narrative. Cover shows saillor and soldier walking hand in hand. Size: 8vo -- 9.25 in. Seller Inventory # 010118

Title: The Other Side of Silence: Men's Lives & Gay...

The only study of gay male history covering the United States since World War I.

Based on hundreds of interviews, new and classic texts, and little-known archival sources, an award-winning writer offers the first narrative history to consider signal moments, general trs, and the multiple meanings of "gay identity" in the whole United States from World War I to the AIDS era and "queer" activism.

The most readable, authoritative, and comprehensive investigation ever, The Other Side of Silence combines history and anecdote, politics and theory to reveal the personalities and textures of a largely unknown culture. A dramatic chronicle of seventy-five years of persecution and accomplishment, the book addresses both in equal detail: witch hunts in schools and the military, crusades of psychiatrists, the resistance long before Stonewall, the inspiring pioneers and activists.

From Newport and the private-party networks of Nebraska and Florida's Emma Jones Society to gay rodeos, athletes, and support groups, here are first-hand accounts of what it has meant (and might mean in the future) to be a sexual outsider in the United States.

The writing of gay history has been a relatively recent invention. Starting with such books as Jonathan Ned Katz's Gay American History (1976), Arthur Evans's Witchcraft and the Gay Counter Culture (1978), and Lillian Faderman's Surpassing the Love of Men (1981), gay and lesbian historians have charted both the presence of gay men and women in the world as well as their influence upon it. John Loughery's The Other Side of Silence builds on this foundation to great effect. Books of gay history (dealing with enormous amounts of new material to interpret) have tended to discuss politics and culture as separate concepts, and the complicated interrelationships between the two have often been confusingly contradictory. Loughery has pieced together--using the work of such historians as Katz, Alan Berube, John D'Emilio, and George Chauncy--a highly readable survey of eight decades of gay male life that knits together the political and the cultural. He is thus able to explain, for instance, how the openly gay career of Tennessee Williams existed during the homophobia of the 1950s, or how the Supreme Court's 1986 Bowers v. Hardwick decision (maintaining that same-sex couples do not have a right to engage in consensual sex in private) could be made at a time when gay arts and culture were flourishing in America. Loughery is as mindful of the passage of anti-gay laws as he is of the plots of gay novels and developments in gay theater; as a result, he manages to assemble--with wit and intelligence--a complex and illuminating social history of gay male lives of this century. --Michael Bronski