Items related to West With The Night 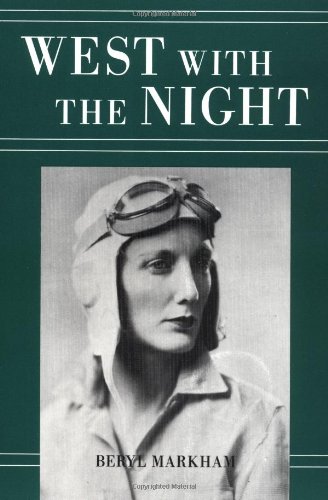 West With The Night

Quantity: 1
View all  copies of this book
Buy Used
Price: US$ 12.95 Convert Currency
Shipping: US$ 6.00 From Canada to U.S.A. Destination, rates & speeds
Add to basket

Title: West With The Night

West with the Night is the story of Beryl Markham--aviator, racehorse trainer, beauty--and her life in the Kenya of the 1920s and '30s.

One of the most beautifully crafted books I have ever read, with some of the most poetic prose passages I could imagine, such as the following, resonating with a stately and timeless quality so absent in our modern life:

There are all kinds of silences and each of them means a different thing. There is the silence that comes with morning in a forest, and this is different from the silence of a sleeping city. There is silence after a rainstorm, and before a rainstorm, and these are not the same. There is the silence of emptiness, the silence of fear, the silence of doubt. There is a certain silence that can emanate from a lifeless object as from a chair lately used, or from a piano with old dust upon its keys, or from anything that has answered to the need of a man, for pleasure or for work. This kind of silence can speak. Its voice may be melancholy, but it is not always so; for the chair may have been left by a laughing child or the last notes of the piano may have been raucous and gay. Whatever the mood or the circumstance, the essence of its quality may linger in the silence that follows. It is a soundless echo.

Born in England in 1902, Markham was taken by her father to East Africa in 1906. She spent her childhood playing with native Maruni children and apprenticing with her father as a trainer and breeder of racehorses. In the 1930s, she became an African bush pilot, and in September 1936, became the first person to fly solo across the Atlantic from east to west.