Items related to Mathematical Subjects - Children Talk About Their Mathematic... 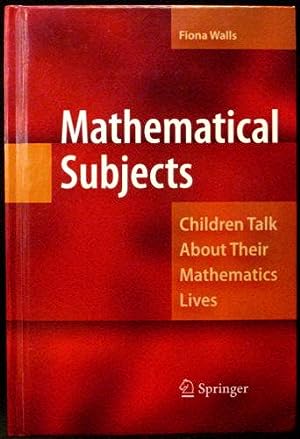 Quantity: 1
View all  copies of this book
Buy Used
Price: US$ 99.38 Convert Currency
Shipping: US$ 30.00 From New Zealand to U.S.A. Destination, rates & speeds
Add to basket

Glossy hard cover in very tidy condition inside and out. Some bumping to corners. Contents tight and clean. 286pp. "This book opens bold windows onto how young people learn and how disparities arise, making it a cutting-edge resource for researchers and libraries, graduates and teachers in mathematics education and early childhood education." (from the blurb). Seller Inventory # 26010

Teaching and learning mathematics is a political act in which children, teachers, parents, and policy makers are made visible as subjects. As they learn about mathematics, children are also learning about themselves – who they are, who they might become. We can choose to listen or not to what children have to say about learning mathematics. Such choices constitute us in relations of power. Mathematical know-how is widely regarded as essential not only to the life chances of individuals, but also to the health of communities and the economic well-being of nations. With the globalisation of education in an increasingly market-oriented world, mathematics has received intensified attention in the first decade of the twenty-first century with a shifting emphasis on utilitarian aspects of mathematics. This is reflected in the reconceptualisation of mathematical competence as mathematical literacy, loosely conceived as those ways of thinking, reasoning and working “mathematically” that allow us to engage effectively in everyday situations, in many occupations, and the cut and thrust of world economies as active, empowered and participatory citizens. It is no surprise then that mathematics has become one of the most politically charged subjects in primary school curricula worldwide. We are experiencing an unprecedented proliferation of regional and national strategies to establish benchmarks, raise standards, enhance achievement, close gaps, and leave no child behind in mathematics education. Industries have sprung up around the design, administration and monitoring of standardised assessment to measure and compare children’s mathematical achievement against identified benchmarks and each other.

We know the process by which children become social, moral, and creative beings, but when―and how―do they become mathematical beings? This thought-provoking volume follows ten children (ages seven through eighteen) in schools in New Zealand, England, Australia, Sweden, and an international school in Switzerland as they come to recognize the mathematical as part of their lives, their academic identities, and their identities as human beings. Through these students’ experiences important themes emerge, including mathematics as work, a domain of learning, and an avenue for competition; mathematical ability as a key to how they are perceived by others; and the relationships between mathematics achievement and the larger social and academic picture. This comparative study of educational systems and academic development will inform readers in these and other salient areas:

Children Talk about Their Mathematics Lives opens bold windows onto how young people learn and how disparities arise, making it a cutting-edge resource for researchers and libraries, graduates and teachers in mathematics education and early childhood education.

We have one big store on Manners Street in Inner City Wellington. Bursting with more books than we know what to do with, our shop has been shamelessly feeding biblioholic addictions in the Wellington area for over 20 years. As well as a huge range of secondhand and antiquarian books on every topic imaginable, we also have a large collection of sheet music and a speciality in new Science Fiction and Fantasy titles.


We accept Visa, Mastercard and AMEX. We also accept cash, cheque or Direct Debit
within New Zealand. Any book found to differ materially from our description may
be returned for a refund but please notify us first. Books will be held on
confirmation of an order but will not be despatched until payment is received.
Arty Bee's Books is a Limited Liability Company, NZ Registration No 902122,
GST#70-063-166. Contact Pippa Burch, info@artybees.co.nz, Tel +64 4 3845339


Orders usually ship within 2 business days. Shipping costs are based on books
weighing 2.2 LB, or 1 KG. If your book order is heavy or oversized, we may contact
you to let you know extra shipping is required.