Items related to The Book of Nothing: Vacuums, Voids, and the Latest...

Home Barrow, John D. The Book of Nothing: Vacuums, Voids, and the Latest Ideas About ...
Stock Image 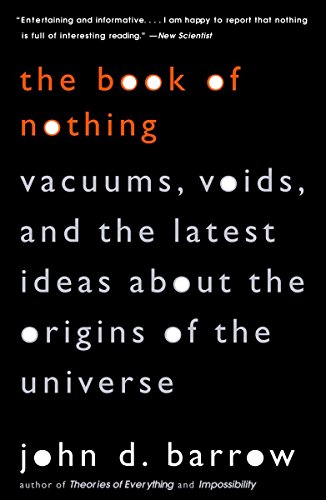 The Book of Nothing: Vacuums, Voids, and the Latest Ideas About the Origins of the Universe

Title: The Book of Nothing: Vacuums, Voids, and the...

What conceptual blind spot kept the ancient Greeks (unlike the Indians and Maya) from developing a concept of zero? Why did St. Augustine equate nothingness with the Devil? What tortuous means did 17th-century scientists employ in their attempts to create a vacuum? And why do contemporary quantum physicists believe that the void is actually seething with subatomic activity? You’ll find the answers in this dizzyingly erudite and elegantly explained book by the English cosmologist John D. Barrow.

Ranging through mathematics, theology, philosophy, literature, particle physics, and cosmology, The Book of Nothing explores the enduring hold that vacuity has exercised on the human imagination. Combining high-wire speculation with a wealth of reference that takes in Freddy Mercury and Shakespeare alongside Isaac Newton, Albert Einstein, and Stephen Hawking, the result is a fascinating excursion to the vanishing point of our knowledge.

From our modern perspective, it is easy to deride the wranglings of medieval scholars over the number of angels that could dance of the head of a pin and whether Nature abhors a vacuum. But as John Barrow reveals in this timely and important book, new discoveries in science have shown that these scholars were right to suspect that Nothing has hidden depths.

It is a concept shot through with paradoxes: even innocent-looking phrases like "Nothing is real" flip their meanings as we ponder them, like those illusions that look like a vase one moment, and opposing faces the next. Nothing is fertile, too, as Barrow shows via a stunning trick that allows every number one can think of to be built out of nothing at all.

But his book is about far more than mind games. Arguably, the most important discovery of 20th-century physics is that there is no such thing as nothing: even the tightest vacuum is teeming with subatomic particles popping in and out of existence, according to the dictates of quantum theory. Now, many astronomers suspect that such "vacuum effects" may have triggered the Big Bang itself, filling our universe with matter. Indeed, the very latest observations suggest that vacuum effects will dictate the ultimate fate of the universe.

As an internationally respected cosmologist, Barrow does a fine job of explaining these new discoveries. The result is a book that is required reading for anyone who wants to understand why there will be much ado about Nothing among scientists in the years ahead. --Robert Matthews, Amazon.co.uk