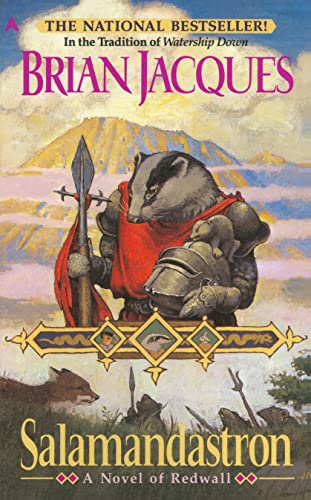 New York Times bestselling author Brian Jacques gives us another tale of Redwall, filled with “The Knights of the Round Table with paws” (The Sunday Times) along with their friends and enemies.

Urthstripe the Strong, a wise old badger, leads the animals of the great fortress of Salamandastron and Redwall Abbey against the weasel Ferahgo the Assassin and his corps of vermin.

As the inhabitants of Redwall relax in the haze of the long, hot summer, they are unaware that the neighboring stronghold of Salamandastron lies besieged by the evil weasel army of Ferhago the Assassin. Nor do they realize that Mara, beloved daughter of Urthsipe, Badger Lord of the Fire Mountain, is in terrible danger. But when a lightening bolt uncovers the sword of Martin the Warrior, young Samkin embarks on adventure that leads him to Mara, and their lives become inextricably entwined.

Brian Jacques once again strikes to the heart in this stunningly executed adventure, another in the best-selling Redwall series, proving, if indeed proof was needed, that he ranks high among the best children's authors in the world. His genius lies in his ability to capture character and atmosphere with a stroke of a pen, drawing the reader in until the only way to start breathing again is to finish the book. --Susan Harrison