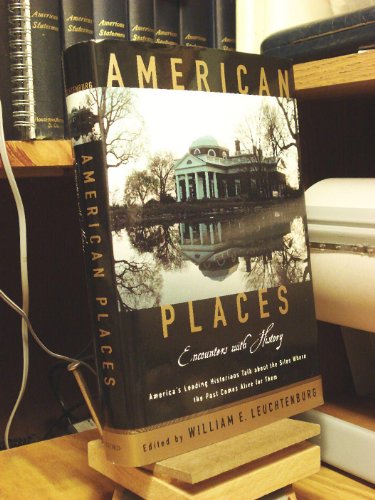 thi book is about America's Leading Historians Talk about the Sites Where the Past Comes Alive for Them. Seller Inventory # ABE-224046566

For anyone interested in history, the physical traces of the past, especially historical places, hold a special fascination. Whether it is a battlefield or the home of a notable American, there is no question that we understand the past in a different and more immediate way when we encounter it "on the ground."
In American Places, more than two dozen of America's most gifted historians write about their own encounters with historic places, bringing a personal viewpoint to bear on a wide variety of sites, ranging from Monticello to Fenway Park. Here James M. McPherson writes about the battlefield of Gettysburg, and how walking the ground of Pickett's Charge inspired one of his books. Kevin Starr visits the Musso & Frank Grill in Hollywood and finds many of the flavors of California history there. Joel Williamson takes a bemused tour of Elvis Presley's Graceland, and David Kennedy tells the story of the "Pig War" of San Juan Island, where a spat between Britain and America over a speck of land in the Pacific helped determine the shape of the U.S. and Canada. William Freehling compares two places, Charleston's Battery and New Orleans' Jackson Square, showing how each reveals the different spirit of the society that created it. And Edward Ayers talks about spending time in Cyberspace, U.S.A., a virtual place that has much in common with the America visited by Alexis de Tocqueville a century and a half ago. Other pieces include Robert Dallek on the FDR Memorial, David Hackett Fischer on the Boston Common, and William Leuchtenburg on his native borough of Queens.
American Places celebrates the career of Sheldon Meyer, who over his years at Oxford University Press has published some of our most distinguished historians, including many Pulitzer Prize and Bancroft Prize winners, virtually all of whom have contributed to this volume.

The events of the past, writes noted historian William E. Leuchtenburg, come alive when we encounter them "on the ground." Pickett's charge and Joshua Chamberlain's defense of Little Round Top, for instance, take on a tangible immediacy when we walk through the fields of Gettysburg, just as the Allied landings at Omaha Beach look that much more astonishing when we see for ourselves the daunting landscape of Normandy. More than that, the places to which a society attaches itself--cemeteries, monuments, museums, and stadiums, to name just a few--reveal much about that society, and it is for that reason that ever more historians are turning to the study of place as a vehicle into the past.

In this volume, Leuchtenburg and more than two dozen of his colleagues consider American places, ranging from iconographic centers, such as Boston Common and Graceland, to lesser-known venues like Barre, Vermont, and Woodside, California. Leuchtenburg himself writes of his hometown of Queens, where history is busily writing itself today as immigrant groups forge a multi-ethnic community much different from the days of yore. The opening essay even addresses the place that is no place--namely, cyberspace--but that is also distinctly American, a frontier whose boundaries are unknown. Readers with an interest in history and cultural geography alike will find much of value in these pages. --Gregory McNamee