Items related to From Love Field: Our Final Hours With President John... 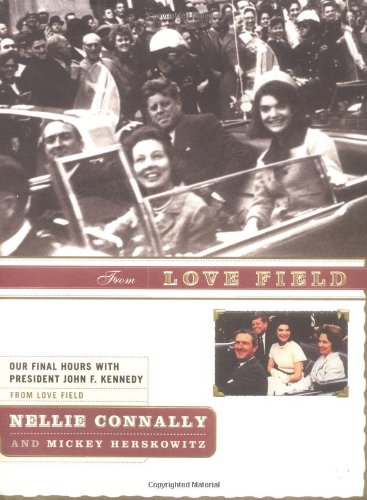 Title: From Love Field: Our Final Hours With ...

"I awakened early on Friday morning, November 22, 1963. The day was gray and somber. Rain was falling...I asked John if I could ride with him to Dallas, and his reply was 'certainly.' We got in the jump seats right behind the driver and secret service man in the front. I was on the driver's side. Mrs. Kennedy was behind me. The President sat directly behind John. We were a happy foursome. I had my yellow roses; Jackie had red ones. I turned to the President as the formation of cars turned onto Elm Street and said, ' Mr. President, you certainly cannot say that Dallas does not love you.'"

Nellie Connally, wife of the late governor of Texas John Connally, shares her personal diary of the JFK assassination. While a seminal document in our nation's history-the original document is to be archived at the University of Texas-From Love Field is, at heart, one woman's account of a personal tragedy. Written for her children and grandchildren forty years ago in November 1963, the diary details what it took as a wife, mother, and friend to cope with an unimaginable personal and public ordeal.

With the twenty-six-page original document expertly reproduced in its entirely and an additional narrative detailing the days before and after the fatal shots, From Love Field also includes many major newsbreaking revelations that further delineate Mrs. Connally's longstanding dispute of the Warren Commission's findings.

Along with Mickey Herskowitz, a longtime family friend and coauthor of John Connally's autobiography In History's Shadow, Nellie Connally has, at last, broken her silence and given the country a personal point of view of the most controversial and disturbing chapter in its history.

Nellie Connally, the former Idanell Brill, met John Bowden Connally at the University of Texas; the two college sweethearts were married on December 21, 1940. Mrs. Connally served as the first lady of Texas from 1962 to 1969. The mother of four, Mrs. Connally still resides in Austin, Texas.

Mickey Herskowitz has written numerous New York Times bestsellers and has been a longtime Connally friend.