Items related to A Map of the World

Home Hamilton, Jane A Map of the World
Stock Image 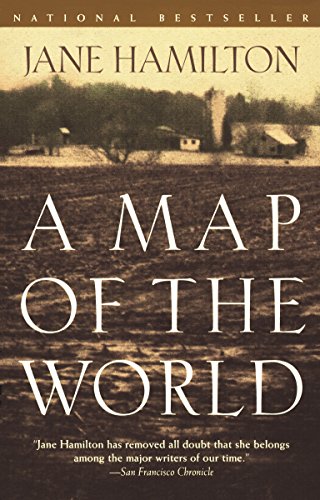 A Map of the World

Title: A Map of the World

From the author of the widely acclaimed The Book of Ruth comes a harrowing, heartbreaking drama about a rural American family and a disastrous event that forever changes their lives.

The Goodwins, Howard, Alice, and their little girls, Emma and Claire, live on a dairy farm in Wisconsin. Although suspiciously regarded by their neighbors as "that hippie couple" because of their well-educated, urban background, Howard and Alice believe they have found a source of emotional strength in the farm, he tending the barn while Alice works as a nurse in the local elementary school.

But their peaceful life is shattered one day when a neighbor's two-year-old daughter drowns in the Goodwins' pond while under Alice's care. Tormented by the accident, Alice descends even further into darkness when she is accused of sexually abusing of a student at the elementary school. Soon, Alice is arrested, incarcerated, and as good as convicted in the eyes of a suspicious community. As a child, Alice designed her own map of the world to find her bearings. Now, as an adult, she must find her way again, through a maze of lies, doubt and ill will.

A vivid human drama of guilt and betrayal, A Map of the World chronicles the intricate geographies of the human heart and all its mysterious, uncharted terrain.  The result is a piercing drama about family bonds and a disappearing rural American life.

Oprah Book Club® Selection, December 1999: In A Map of the World, appearance overwhelms reality and communal hysteria threatens common sense. Howard and Alice Goodheart, the couple at the center of Jane Hamilton's 1994 novel, have labored mightily to create a pastoral paradise in a Wisconsin subdivision. Their 400-acre dairy farm is the last in Prairie Center, and they're working flat out to raise their two young girls in a traditionally bucolic manner. Yet paradoxically, they strike their neighbors as unacceptably modern, and have been treated as interlopers since the day of their arrival. Howard, in love with his vocation, chooses not to believe that they've been frozen out. But Alice, flinty and quick to judge, finds things harder. And her job as school nurse doesn't work wonders for her reputation either. Happily, there's one exception to this epidemic of unfriendliness: their closest neighbors. Theresa and Dan, who also have two young daughters, function as a virtual lifeline for the embattled family.

But in June 1990, whatever idyll the Goodhearts have worked for comes to a permanent end. On a beautiful morning--marred by her 5-year-old's tantrum but still recuperable--Alice looks forward to taking her children and Theresa's youngest for a swim. Distracted for several minutes, she has no idea that the 2-year-old is no longer in the house:

Lizzy had run to the pond and splashed in. It had felt good on her hot feet and she kept running and then she was pedaling and pedaling. She tried to grab hold of the water, pawing for the metal bar, a ladder rung, her mother, but there was nothing. She clutched and flailed.... She sank. The trout that Howard had stocked in the pond swam along through the dark water. They noticed Lizzy out of the corner of their eyes. They had inherited the knowledge of that look, and they knew it by heart.

This is only the first of Alice's body blows. Next, she's questioned about one of her students, a memorably bad seed. On the verge of collapse, she cries out, "I hurt everybody!"--which will later be construed as a confession. Charged with sexual abuse and unable to come up with $100,000 in bail, she is forced to await trial in jail.

Narrated first by Alice, then Howard, and then Alice again, A Map of the World moves from intimate domesticity to courtroom drama with grace and subtlety. Hamilton wrote her book when accusations of abuse in schools and day care were peaking, yet this is not a modish work or an "issue novel" but a lasting creation of several complex lives. At one point, fed up with civil mechanisms, Alice tells her lawyer: "'Let Oprah be the judge.... Let Robbie and me, Mrs. Mackessy, Howard, Theresa, Dan, Mrs. Glevitch--let all of us come before Oprah. Let the studio audience decide. They're nice suburban woman, many of them, dressed for a lark. They have common sense and speak their minds.'" Apparently La Winfrey was listening, since she chose this beautifully observed novel for her book club. --Kerry Fried