Items related to Postcards from the Trenches Images from the First... 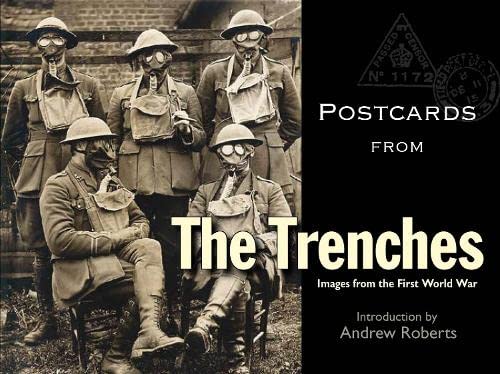 Postcards from the Trenches Images from the First World War

Quantity: 2
View all  copies of this book
Buy New
Price: US$ 11.22 Convert Currency
Shipping: US$ 12.63 From United Kingdom to U.S.A. Destination, rates & speeds
Add to basket

Title: Postcards from the Trenches Images from ...

World War I has come down to us in indelible images—those of airplane bombers, bleak-eyed soldiers, stern-faced commanders, and the ruins of countless villages. But soldiers themselves also took photographs on the battlefield, and many of their striking images were transformed into postcards that were sent home to family and friends or collected as war mementos. Postcards from the Trenches gathers a number of these postcards to create a striking visual history of World War I.
The cards in this compelling volume were created not only by soldiers, but also by embedded journalists from France, Belgium, Austria, Germany, and Britain. The images capture scenes both humorous and poignant, including soldiers having a mock party with little food to eat, wounded soldiers smiling for the camera, a makeshift trench hospital, the bloody aftermath of a battle, and a huddle of men taking what they know could be their last communion before marching onto the battlefield. Other cards document the mundane duties that dominated wartime life, including men digging trenches, troops marching to new trenches and battlefields, and or soldiers nearly comatose with boredom while waiting for the fight to begin. This stunning visual narrative opens a new window into one of the most analyzed events in history, as the postcards’ images testify to the resilience and bravery of soldiers in the most trying circumstances.
A fascinating and unprecedented historical document, Postcards from the Trenches draws back the curtain to unflinchingly show the daily horror and humanity that define life in war.

Andrew Roberts is a historian and biographer who has published books on Waterloo, Hitler and Churchill, the Marquis of Salisbury, the Earl of Halifax and the history of English-speaking peoples since 1900 amongst many others. He is an expert on military history and has won many awards for his writing.