Items related to Living With Our Genes 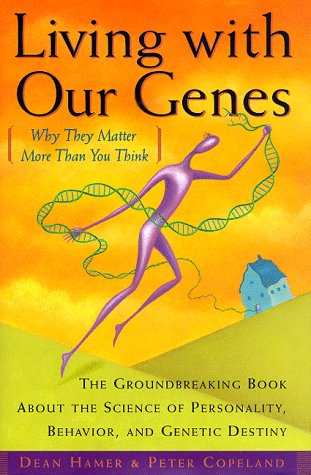 Living With Our Genes

Quantity: 1
View all  copies of this book
Buy New
Price: US$ 7.00 Convert Currency
Shipping: US$ 4.00 Within U.S.A. Destination, rates & speeds
Add to basket

Title: Living With Our Genes

No two people behave exactly the same. There are overeaters and undereaters, alcoholics and teetotalers, over--and underachievers. We have adventurers and armchair travelers, Don Juans and wallflowers, the timid and the bold-and every possible mixture and variation. Living With Our Genes argues that genes are the single most important factor in the wondrous variability of human behavior. In the past, studies of twins supported the assumption that inheritance plays a major role in why we feel or behave the way we do. Now, scientists are developing an impressive arsenal of research to identify the individual genes that guide human behavior.
Living With Our Genes will help readers understand their particular genetic make-up and decipher the mysteries of genetically inherited behavioral traits. Chapters are organized by various traits or characteristics so that readers can quickly turn to the issues most pressing in their lives, whether it's body weight or moodiness. Timid folks will investigate the molecular role in shyness. The flirtatious will turn to the chapter on sex. Am I angry because my dad is angry? What is it about my personality that prevents me from getting along with my coworkers? Hamer decodes the genetics of each trait, based on the very latest scientific findings, and then shows how the genes express themselves in real people.
In the tradition of Listening to Prozac, this is an anecdote-filled book that attempts to explain how we arrive at the idea of self in an ever-changing scientific landscape.

How many of our faults are in our genetic stars, and how many in ourselves? Human geneticist Dean Hamer, whose research team found the popularly termed "gay gene," surveys what is currently known about the inheritance of human behavior and personality. Hamer and science writer Peter Copeland take a calm, broad-minded look at hot-button topics such as sex, drugs (especially tobacco and alcohol), and violence, as well as anxiety, intelligence, and eating habits. Their conclusions are solidly on the side of both nature and nurture: "A DNA map offers possibilities and predictions but not certainty.... Free will is alive and well, and probably genetic."