Home Livingston, A. D. Good Vittles: One Man's Meat, a Few Vegetables, and a Drink or ...
Stock Image 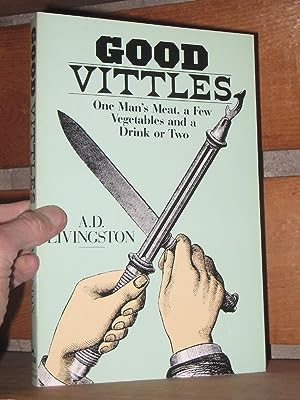 Good Vittles: One Man's Meat, a Few Vegetables, and a Drink or Two

Quantity: 2
View all  copies of this book
Buy Used
Price: US$ 13.00 Convert Currency
Shipping: US$ 4.00 Within U.S.A. Destination, rates & speeds
Add to basket

Some people revel in culinary marathons with dozens of scarce ingredients, chopping, skimming, and dicing themselves into a frenzy, but not A.A. Livingston. Here is a cookbook for those who would rsther eat tham mince. Spiced with uproarious wit and the love of good food and good living of Livingston's native SOuth, this book is a must for anyone who eats.

With his marked preference for no-nonsense, unadorned Southern fare, Livingston's ( Outdoor Life's Complete Fish & Game Cookbook ) recipes won't set the culinary world afire. However, their fanciful presentation and the droll humor of his anecdotes (which may outnumber the recipes) are savory indeed. Consider the party at which he solemnly "read" Shelley's poem "Ozymandias" aloud--from Yeats's collected works. In one typical recipe, for corn bread, the entire ingredient list consists of white corn meal, good water and salt. Some cooks, Livingston notes, "have a big thing" about making the batter with beer. He'd rather make it with water and drink the beer while the corn bread's frying. Although the food runs to plain, Livingston's suggestions are seldom bland. For example, don't get a goat mad or hot if you're going to eat him. A veteran outdoorsman, his "ten steps to a succulent roast" start with a perfectly serious exhortation to climb a pine tree and look around for a deer. However, cooks with a taste for venison will surely be rewarded when they serve their guests a roast encased in rock salt and crack open the salt casing at the table.
Copyright 1990 Reed Business Information, Inc.