Items related to The Girl Who Loved Tom Gordon : A Novel 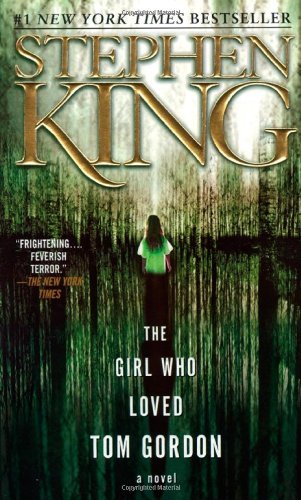 The Girl Who Loved Tom Gordon : A Novel

Title: The Girl Who Loved Tom Gordon : A Novel

From international bestseller Stephen King, a classic story that engages our emotions on the most primal level, a fairy tale grimmer than Grimm but aglow with a girl’s indomitable spirit.

The brochure promised a “moderate-to-difficult” six-mile hike on the Maine-New Hampshire branch of the Appalachian Trail, where nine-year-old Trisha McFarland was to spend Saturday with her older brother Pete and her recently divorced mother. When she wanders off to escape their constant bickering, then tries to catch up by attempting a shortcut through the woods, Trisha strays deeper into a wilderness full of peril and terror. Especially when night falls.

Trisha has only her wits for navigation, only her ingenuity as a defense against the elements, only her courage and faith to withstand her mounting fear. For solace she tunes her Walkman to broadcasts of Boston Red Sox games and the gritty performances of her hero, number thirty-six, relief pitcher Tom Gordon. And when her radio’s reception begins to fade, Trisha imagines that Tom Gordon is with her—her key to surviving an enemy known only by the slaughtered animals and mangled trees in its wake.

Trisha McFarland is a plucky 9-year-old hiking with her brother and mom, who is grimly determined to give the kids a good time on their weekends together. Trisha's mom is recently divorced, and her brother is feuding with her for moving from Boston to small-town Maine, where classmates razz him. Trisha steps off the trail for a pee and a respite from the bickering. And gets lost.

Trisha's odyssey succeeds on several levels. King renders her consciousness of increasing peril beautifully, from the "first minnowy flutter of disquiet" in her guts to her into-the-wild tumbles to her descent into hallucinations, the nicest being her beloved Red Sox baseball pitcher Tom Gordon, whose exploits she listens to on her Walkman. The nature writing is accurate, tense, and sometimes lyrical, from the maddening whine of the no-see-um mosquito to the profound obbligato of the "Subaudible" (Trisha's dad's term for nature's intimations of God). Our identification with Trisha deepens as we learn about her loved ones: Dad, a dreamboat whose beer habit could sink him; loving but stubborn Mom; Trisha's best pal, Pepsi Robichaud, vividly evoked by her colorful sayings ("Don't go all GIRLY on me, McFarland!"). The personal associations triggered by a full moon, the running monologue with which she stays sane--we who have been lost in woods will recognize these things.

In King's revealing Amazon.com interview, he said the one book he wishes he'd written was Lord of the Flies. When Trisha confronts a vision of buzzing horror in the middle of the woods, King creates his strongest echo yet of the central passage of Golding's novel. --Tim Appelo


Payment methods available are: Cash, Checks, Visa, Mastercard, PayPal,
money orders ( must be negotiable in Canada) I reserve right to hold
checks until they clear.

All books are securely packaged.

Returns accepted for full refund within 10 days of receipt, prior notification
required.


Prices in usd. We are located in Canada but take USA and International orders to the USA two or three times a week for shipping. Global Priority is also available, cost is depending on size. Shipping costs are based on books weighing 2.2 LB, or 1 KG. If your book order is heavy or oversized, we may contact you to let you know extra shipping is required.