Items related to A Cultivated Life: A Year in a California Vineyard 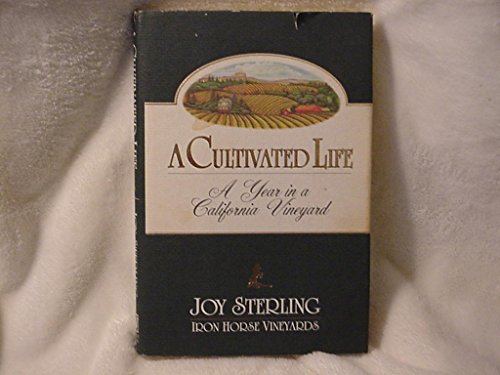 A Cultivated Life: A Year in a California Vineyard

Title: A Cultivated Life: A Year in a California ...

A seasonal journal of one year in California's Iron Horse Vineyards describes the growing of grapes and the making and selling of wine, evoking the hardships and satisfactions of the vintner's life

Rambling, sometimes rankling account of a year spent producing, promoting, and peddling the wines of the noted Iron Horse Vineyards in California's Sonoma Valley. Sterling--daughter of the firm's original owners, and marketing and sales director of Iron Horse since 1985--packs in so much p.r. that this is like an infomercial between covers. Sterling describes the winery's yearly round of domestic activities--family get-togethers, anniversaries, gardening, entertaining the doyens of the food-and-beverage industries--with an air of superiority that's captured well in her father's observation that ``Ralph Lauren is just an imitation of people like us.'' The author also turns her attention to such wine arcana as the perils of phylloxera, a fungal disease that has decimated vineyards worldwide; the differences between cordon and cane pruning; and the complexities of the malo-lactic fermentation process. Also included are some snipes at rival wineries, mainly in nearby Napa Valley; plugs for various restaurateurs and their establishments (presumably Iron Horse clients); and name-dropping of a host of political and entertainment figures with whom the author and her family have come in contact. One of Sterling's more successful sections deals with wine experts and their metaphorical jargon--about which she says, ironically, ``more often than not, winespeak is merely pretentious and boring.'' Touted by the publisher as a successor to Peter Mayle's A Year in Provence, Sterling's tale merely proves that charm, like wine, often doesn't travel well. (Ten watercolors) -- Copyright ©1993, Kirkus Associates, LP. All rights reserved.

With 3 stores less than 1 hour outside the DC/Metropolitan area (1 in Gaithersburg, 1 in Frederick and 1 in Hagerstown, MD), we have the largest selection of books in the tri-state area. Wonder Book and Video has been in business since 1980 and online since 1997. We have over 1 Million books for sale on our website and another 1 Million books for sale in our 3 locations. Items on Abe are not necessarily in stock at our retail locations. Please do not call the stores to place orders for Abe Books sales. We have a very active online inventory and as such, we can receive multiple orders for the same item. We fill those orders on a first come first serve basis, but will refund promptly any items that are out of stock. Since 1980 it has always been about the books. ALL kinds of books from 95 cent children's paperbacks to five figure rare and collectibles. A merging of the old and new is where we started, and it is where we are today. Our retail stores have always been places where a reader can rush in looking for a title needed for a term paper that is due the next day, or where bibliophiles can get lost "in the stacks" for as long as they wish. In 2002 USAToday recognized us as "1 of 10 Great Old Bookstores", and we have been featured in numerous other newspaper and TV stories including Washington Post and CSpan. Members ABAA, ILAB.

RETURNS are cheerfully accepted up to 30 days. We ship out within 1-2 business days and U.S. Standard Shipments usually arrive within 6-9 business days, Priority 3-6. We want you to be satisfied with the book you order. Our general description is conservative and the book should be as good or better than our general descr...


STANDARD DOMESTIC U.S. SHIPPING IS FREE. Priority Shipping is only $6.99 for first item, $1 each additional. Orders ship within 2 business days. Shipping outside of U.S. is typically between $8-13 and takes between 8-15 business days. Heavier books may require additional shipping. Faster Needs Please Inquire.