Items related to Bummy Davis vs. Murder, Inc.: The Rise and Fall of... 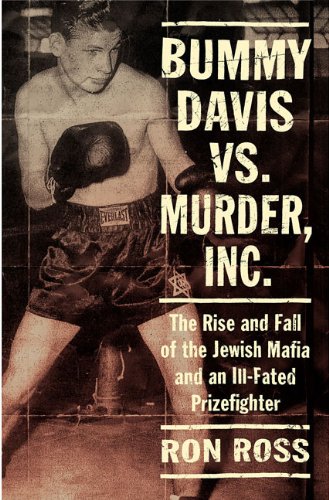 Bummy Davis vs. Murder, Inc.: The Rise and Fall of the Jewish Mafia and an Ill-Fated Prizefighter

A tough kid with a heart of gold, Al "Bummy" Davis grew up in the streets of Brownsville, New York on the fringes of the Jewish mob during the 20's and 30's-thanks to his older brother, a feared racketeer. But as much as he resisted the underworld of Murder, Inc. by becoming a championship fighter and a Brownsville hero, he never did escape the Jewish Mob's shadow. Though he repeatedly stood up to mob kingpins, Bummy suffered a spectacular fall from grace as a result of a smear campaign by the press.

Ron Ross' Bummy Davis vs. Murder, Inc. is not just about one Jewish boxer, his meteoric rise to fame, and victimization by the press. Bummy's life was intertwined with the Great Depression, the survival of the Brooklyn Jewish immigrant population during Prohibition, and the inevitable offshoot of Prohibition-Murder Inc., one of American history's most notorious band of killers. Ron Ross portrays an important historical time period, an enigmatic Jewish subculture, and the surprising juxtaposition of a generation of Jews and their talent for boxing.

Bummy Davis vs. Murder, Inc. features a cast of colorful villains whom you'll love to hate, a boxing legend who was the unwitting pawn of fate, and the human drama of the boxing world. With his vivid, street-smart Damon Runyonesque writing style, Ron Ross redeems a tragic hero who fought the pull of one of the most brutal groups of killers to grace the twentieth century.

Ron Ross is a native New Yorker and was a professional boxer, fight promoter, and manager. Serving on the board of directors of the Veteran Boxers Association of New York and the B'Nai B'rith Sports Lodge of New York, he divides his time between Oceanside, New York, and Boca Raton, Florida with his wife Susan.