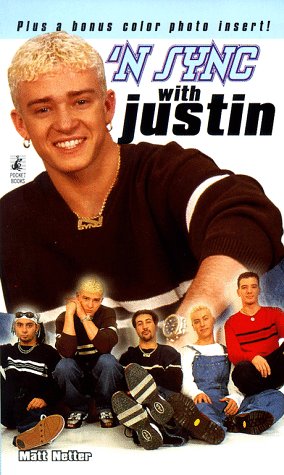 Chapter One: a born performer

From Memphis, Tennessee, to Orlando, Florida, to New York, Los Angeles, and everywhere in between, to Europe, Asia, Australia, Africa, South and Central America, millions of people from all corners of the world, of different languages, cultures, and customs, know who Justin Timberlake is. To many adults he's just "the curly-haired guy from 'N Sync," But to kids and teens everywhere, he's a superhero.

Though superhero is a term usually reserved for the likes of Batman and Wonder Woman, it's as appropriate a classification you'll find for a guy who's far too talented to be human. What special powers does he possess? He has an angelic voice that can steal your ear, an adorably warm smile that can melt your heart, and an endearing charm that can make you love him. While he may not use his powers to save lives on a daily basis, he has his own superhero duties, like churning out hit records, selling out concert arenas, and bringing joy to millions of fans. Incredibly, the seemingly immortal Justin is not from another planet, but from Memphis, Tennessee. And, as impossible as it is to believe, he's just a regular teen with hopes and dreams just like you, only his wildest ones have come true.

God Must Have Spent a Little More Time on Him

"Man, I'm havin' the time of my life," Justin gloated on MTV. "There's people out there who dream of being actors and actresses and there's people out there who dream of being astronauts. The thing that's special about what I do, to me, is that I love to do it." Justin is on cloud nine because as a member of 'N Sync he is fulfilling his life's dream to entertain. From before he could walk it was obvious that Justin was a born performer. Years of practice, hard work, persistence, guidance, adversity, and even a little luck have put Justin on top of the world.

These days, you won't find a teen magazine in America that doesn't feature a story on 'N Sync and a gorgeous pinup of their youngest member staring back at you. Even magazines like TV Hits in Australia, Smash Hits in Great Britain and Big! in Europe are giving their young fans a healthy dose of the blonde-haired blue-eyed boy wonder. As one teen magazine editor told the author, "Justin's popularity with our readers has surpassed Leonardo DiCaprio, Taylor Hanson, and even Nick Carter. He's it." Justin's still just getting used to celebrity status. "I don't know what to say to that," he told 16 magazine.

In spite of his disbelief, Justin's rise to glory was more progressive than it was for his bandmates. Having begun his career as an entertainer at an earlier age and with several years of talent shows, followed by a two-year stint on The Mickey Mouse Club, under his belt, Justin has gradually, if not methodically, eased his way into fame and fortune. Yet, in his eighteen years, Justin has risen from tireless toddler, to singing sensation, to TV teen, to lead singer of one of the most famous pop groups in the world. It all began eighteen years ago.

When Memphis, Tennessee natives Randy and Lynn Timberlake found out they were expecting their first child, they had no idea they were about to introduce the world to a new star. On January 31, 1981, a beautiful baby boy was born and they christened him Justin Randall Timberlake. "I think I was born at Saint Jude Medical Center or another children's medical center in Memphis, Tennessee," Justin tried to remember for Super Teen magazine.

Lynn and Randy brought their curly, blond-coifed, blue-eyed bundle of joy back to their home in Memphis, Tennessee, where they proudly introduced him to his family, friends, and neighbors. From that day, Justin's parents knew they had something special on their hands. By the time he was a toddler, Justin made it obvious that he liked being the center of attention. Lynn sang to him and played music for him, to which he was quite responsive, and by the time he could talk, Justin began singing.

"I've been singing since I was two," Justin told Teen People magazine. "If I could talk, I could sing. I was always performing for somebody." Indeed he was. Justin's relatives recall that at Christmas, Justin demanded every guest's attention by dancing around, singing, or telling jokes. As a tot, Justin even toted around a little plastic guitar. Dad, Randy, who was in a bluegrass band and has a beautiful voice himself, encouraged little Justin's singing.

Randy and Lynn divorced when Justin was young, and both have since remarried. Lynn married Paul Harless, a Memphis banker, who now flies to Orlando to be with his family on weekends. Though Justin still maintains a relationship with his birth father, Randy, his wife, Lisa, and their two boys, Jonathan, five, and Steven, eight months, he was raised mostly by his mother and stepfather.

Though divorce is tough on any kid, Justin still had a very normal childhood filled with love and joy. Justin grew up part of a big family that included two sets of loving parents and four sets of doting grandparents, as well as plenty of pets, including two dogs, Scooter and Ozzie, and two cats, Millie and Alley. Whichever way he turned, Justin was showered with support, encouragement, and affection. In the 'N Sync liner notes, Justin thanked "My parents for loving the whole world, and for showing me the way to do that, for loving me (even when it's hard!) and for being so supportive of me. My grandparents for giving me everything (I mean everything!) right down to their hearts. Thanks to all my other family members for supporting me."

Justin attended elementary school in Memphis, but it was immediately clear that he was not like all the other kids. "I'm not gonna necessarily say I was a good kid in school," Justin admitted to Tiger Beat magazine, "but I was in good with all the teacher and priincipals, so I never got in trouble." Justin found one outlet for his considerable energies in basketball and another in singing.

As a kid, Justin idolized the world's most famous Michaels, Jackson and Jordan. After school, he would play basketball for hours on end, pretending to score the winning basket like his hero Michael Jordan. Whenever darkness or inclement weather didn't allow for basketball, Justin stayed indoors listening to Stevie Wonder on his parents' stereo and pretending to be Michael Jackson, dancing and singing around the house.

To this day, Justin swears, "my voice is my most prized possession." Mom, Lynn, recognized that, and when he was eight years old, she signed Justin up for singing lessons. He got additional vocal practice, from singing in the choir, like his father, grandparents, and many other relatives before him. "I grew up singing in church," Justin told Teen Beat magazine. "Then I got into voice lessons when I was about eight. Then I did talent shows and things, and from that moment on, I knew that's what I wanted to do."

Among those talent shows was a stage performance at the Grand Ole Opry, a golden opportunity that Justin still treasures. When Justin was ten, he was part of a little group that emulated New Kids on the Block, the 'N Sync of the late '80s and early '90s. They sang New Kids songs at a school production and then began performing at other local schools, developing a small following along the way.

Justin's big break however, would come in 1992 when he was eleven years old. The long running TV talent showcase Star Search held a talent search in Memphis, and Justin was chosen to appear on the show. Justin and his mom flew to Orlando, Florida, where the show is taped. As a Junior Vocalist contestant, Justin had the once-in-a-lifetime opportunity to put his singing and dancing talents on display for both the studio audience and millions of television viewers.

Though his rendition of a country song didn't win him the competition, Justin was a winner nonetheless. As luck would have it, a Disney Channel casting director was in the crowd and was quite impressed with the looks and talent of the eleven-year-old sensation. The Disney executive approached Justin and his mom and told them about an open audition for new cast members of the Disney Channel's long-running franchise, The Mickey Mouse Club.

Justin and Lynn headed back to Memphis where the audition was to be held. Thirty thousand kids auditioned and shining star Justin was one of just seven selected to join the cast for the 1993 season. With that, the excited mother and son packed their belongings and flew down to Orlando to take up new residence near Disney-MGM Studios where MMC is filmed.


Returns accepted as under Abebook policies.