Items related to Islamist Mobilization in Turkey: A Study in Vernacular... 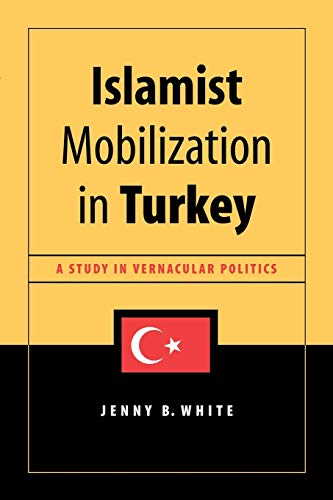 Islamist Mobilization in Turkey: A Study in Vernacular Politics (Studies in Modernity and National Identity)

Title: Islamist Mobilization in Turkey: A Study in ...

Winner of the William A. Douglass Prize in Europeanist Anthropology

The emergence of an Islamist movement and the startling buoyancy of Islamic political parties in Turkey--a model of secular modernization, a cosmopolitan frontier, and NATO ally--has puzzled Western observers. As the appeal of the Islamist Welfare Party spread through Turkish society, including the middle class, in the 1990s, the party won numerous local elections and became one of the largest parties represented in parliament, even holding the prime ministership in 1996 and 1997. Welfare was formally banned and closed in 1998, and its successor, Virtue, was banned in 2001, for allegedly posing a threat to the state, but the Islamist movement continues to grow in popularity.

Jenny White has produced an ethnography of contemporary Istanbul that charts the success of Islamist mobilization through the eyes of ordinary people. Drawing on neighborhood interviews gathered over twenty years of fieldwork, she focuses intently on the genesis and continuing appeal of Islamic politics in the fabric of Turkish society and among mobilizing and mobilized elites, women, and educated populations.

White shows how everyday concerns and interpersonal relations, rather than Islamic dogma, helped Welfare gain access to community networks, building on continuing face-to-face relationships by way of interactions with constituents through trusted neighbors. She argues that Islamic political networks are based on cultural understandings of relationships, duties, and trust. She also illustrates how Islamic activists have sustained cohesion despite contradictory agendas and beliefs, and how civic organizations, through local relationships, have ensured the autonomy of these networks from the national political organizations in whose service they appear to act.

To illuminate the local culture of Istanbul, White has interviewed residents, activists, party officials, and municipal administrators and participated in their activities. She draws on rich experiences and research made possible by years of firsthand observation in the streets and homes of Umraniye, a large neighborhood that grew in tandem with Turkey’s modernization in the late 20th century. This book will appeal to anthropologists, sociologists, historians, and analysts of Islamic and Middle Eastern politics.

Jenny B. White is associate professor of anthropology at Boston University.