Items related to Between You and Me: A Memoir with 82-Minute DVD

Home Mike Wallace; Gary Paul Gates Between You and Me: A Memoir with 82-Minute DVD
Stock Image 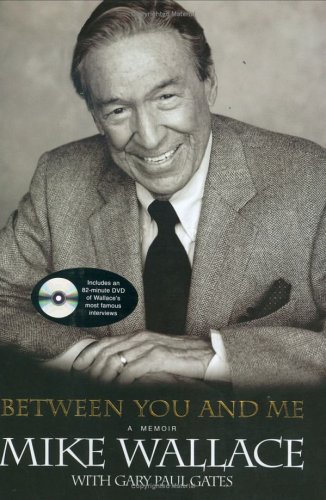 Between You and Me: A Memoir with 82-Minute DVD

Quantity: 1
View all  copies of this book
Buy Used
Price: US$ 11.95 Convert Currency
Shipping: US$ 5.00 Within U.S.A. Destination, rates & speeds
Add to basket

Book is in Very Good + condition. Boards are clean, not bumped. Fore edges have a small amount of wear. Interior is clean and legible. Not remaindered. Dust Jacket is in Very Good + condition. Tiny bit of shelf wear/rub. Tiniest bit of wear along the edges. Not price clipped. Dust Jacket is covered by Mylar wrapper. All-Ways well boxed, All-Ways fast service. Thanks. Seller Inventory # 029437

At the age of 87, Mike Wallace is a legendary figure in broadcast journalism. Now, after 60 years of reporting on important events around the world, he shares his personal stories about the incredible range of celebrities, newsmakers, criminals, and world leaders who have subjected themselves to his unique brand of questioning.Through Wallace's intimate observations about these figures, we experience afresh the pivotal events that have shaped our world. Here, we meet the guilt-racked Secret Service agent assigned to John F. Kennedy's car in Dallas. We learn about the candid moment when President Nixon revealed an unexpected softer side. We witness the underpinnings of the century's greatest social movement through Wallace's eyes as he manages to earn the trust of major civil rights leaders, and we see the trauma Wallace experienced while covering the conflict in Israel. These off-camera anecdotes and fascinating excerpts from Wallace's interviews- with everyone from Eleanor Roosevelt to all the presidents of the last half century, from Frank Lloyd Wright to Johnny Carson, from Margaret Sanger to Malcom X-give us a new perspective on some of the greatest lives and minds of our time.With a reporter's eye for detail, Wallace mingles laughter, tragedy, and revelatory insight in a memoir unlike any other. For anyone who's ever wondered what it's like to make history for a living, this is a must-read.

Mike Wallace has been coeditor of 60 Minutes, CBS's seminal news magazine, since its premiere in 1968. The 2004-5 season marks his 37th on the broadcast. He has won innumerable awards for his work and been inducted into the TV Hall of Fame.