Items related to A Conspiracy of Paper 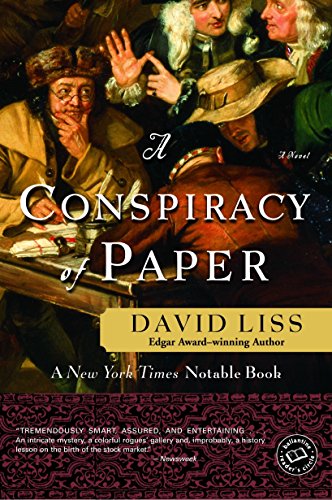 A Conspiracy of Paper

439 pp. Light rippling ofabout 20 rear pages. Txt OK. Binding firm, no markings. Includes a 10-page interview with the author. A historical thriller about a Jewish boxer who is a sort of bounty hunter in the rough and tumble financial world of 18th century London. The hero uncovers a stock fraud as he investigates his father's death. Marketed as a "New York Times Notable Book" with a laudatory cover blurb by Times reviewer Christopher Lehmann-Haupt. Size: 8vo - over 7ľ" - 9ľ" tall Size: 8vo - over 7ľ" - 9ľ" tall. Seller Inventory # 009728

Title: A Conspiracy of Paper

Benjamin Weaver, a Jew and an ex-boxer, is an outsider in eighteenth-century London, tracking down debtors and felons for aristocratic clients. The son of a wealthy stock trader, he lives estranged from his family—until he is asked to investigate his father’s sudden death. Thus Weaver descends into the deceptive world of the English stock jobbers, gliding between coffee houses and gaming houses, drawing rooms and bordellos. The more Weaver uncovers, the darker the truth becomes, until he realizes that he is following too closely in his father’s footsteps—and they just might lead him to his own grave. An enthralling historical thriller, A Conspiracy of Paper will leave readers wondering just how much has changed in the stock market in the last three hundred years. . . .

A fool and his money are soon parted--and nowhere so quickly as in the stock market, it would seem. In David Liss's ambitious first novel, A Conspiracy of Paper, the year is 1719 and the place London, where human greed, apparently, operated then in much the same manner as it does today. Liss focuses his intricate tale of murder, money, and conspiracy on Benjamin Weaver, ex-boxer, self-described "protector, guardian, bailiff, constable-for-hire, and thief-taker," and son of a Portuguese Jewish "stock-jobber." Weaver's father, from whom he has been estranged, has recently died, the victim of a horse-drawn carriage hit and run. Though his uncle has suggested that the accident wasn't quite so accidental, Benjamin doesn't give the idea much credence:

I blush to own I rewarded his efforts to seek my opinion with only a formal reply in which I dismissed his ideas as nonsensical. I did so in part because I did not wish to involve myself with my family and in part because I knew that my uncle, for reasons that eluded me, had loved my father and could not accept the senselessness of so random a death.

But then Benjamin is hired by two different men to solve two seemingly unrelated cases. One client, Mr. Balfour, claims his own father's unexpected death "was made to look like self-murder so that a villain or villains could take his money with impunity," and even suggests there might be a link between Balfour senior's death and that of Weaver's father. His next customer is Sir Owen Nettleton, an aristocrat who is keen to recover some highly confidential papers that were stolen from him while he cavorted with a prostitute. Weaver takes on the first case with some reluctance, the second with more enthusiasm. In the end, both converge, leading him back to his family even as they take him deep into the underbelly of London's financial markets.

Liss seems right at home in the world he's created, whether describing the company manners of wealthy Jewish merchants at home or the inner workings of Exchange Alley--the 18th-century version of Wall Street. His London is a dank and filthy place, almost lawless but for the scant protection offered by such rogues as Jonathan Wilde, the sinister head of a gang of thieves who profits by selling back to their owners items stolen by his own men. Though better connected socially, the investors involved with the shady South Sea Company have equally larcenous hearts, and Liss does an admirable job of leading the reader through the intricacies of stock trading, bond selling, and insider trading with as little fuss, muss, and confusion as possible. What really makes the book come alive, however, are the details of 18th-century life--from the boxing matches our hero once participated in to the coffee houses, gin joints, and brothels where he trolls for clues. And then there is the matter of Weaver's Jewishness, the prejudices of the society he lives in, and his struggle to come to terms with his own ethnicity. A Conspiracy of Paper weaves all these themes together in a manner reminiscent of the long, gossipy novels of Henry Fielding and Laurence Stern. Indeed, Liss manages to suggest the prose style of those authors while keeping his own, less convoluted style. This is one conspiracy guaranteed to succeed. --Alix Wilber