Items related to Forbidden Broadway: Behind the Mylar Curtain 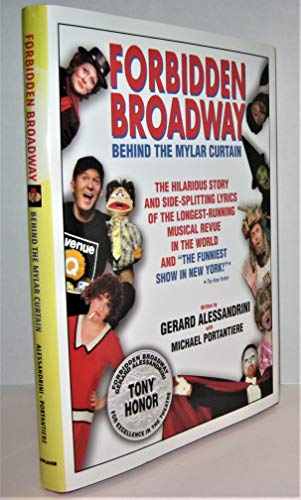 Forbidden Broadway: Behind the Mylar Curtain

Quantity: 1
View all  copies of this book
Buy New
Price: US$ 22.50 Convert Currency
Shipping: US$ 4.00 Within U.S.A. Destination, rates & speeds
Add to basket

The hilarious story of the longest-running musical revue in the world – 30 years! “The funniest show in New York!” – The New Yorker

Forbidden Broadway is a no-holds-barred chronicle of the revue that has enthralled and delighted audiences in New York City, Los Angeles, London, and all around the world for three decades, spoofing shows from Les Misérables to Wicked and stars from Ethel Merman to Hugh Jackman. It is a whimsical inside glimpse at the evolution of the show in its 20 incarnations to date, with zany parodies, hilarious lyrics, and behind-the-scenes stories – told by the creator/producer, Gerard Alessandrini. Filled with dozens of outrageous pictures from the production, this is one of the most fun-filled books ever created about theatre, a one-of-a-kind “mockument” that every showbiz aficionado will treasure.

Includes 100s of photos including two 16-page color sections, as well as famous Forbidden Broadway parody lyrics to over 100 songs from the show.

Gerard Alessandrini (New York) is best known for creating, writing, and directing all the editions of Forbidden Broadway and Forbidden Hollywood in New York, Los Angeles, London, and around the world., He is the recipient of a Lifetime Achievement Award from the Drama League, and in 2006 received a special Tony Award Honor for Excellence in Theater.