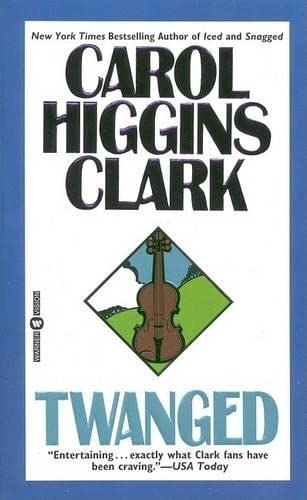 A Week in The Hamptons can be Murder Sleuth Regan Reilly is hired as a bodyguard for singer Brigid O'Neill, a rising country star who has been receiving threatening "love notes." Brigid also possesses a "magical" Irish fiddle said to be cursed-whoever takes it out of Ireland will have an accident or face death. Still, Brigid brings it to the Hamptons, where her band will perform at a Fourth of July concert. Chappy Tinka, heir to a thumbtack fortune, and his ditzy wife, Bettina, are their hosts. Regan joins them at "Chappy's Compound," an oceanfront estate where they encounter Bettina's guru Peace Man, Chappy's bumbling sidekick Duke, a feng shui specialist obsessed with rearranging furniture-and a party guest found floating face-down in the pool. Is the curse of the fiddle real? Is there a murderer in the house? As the concert nears, the menace to Brigid grows, and Regan must discover the truth before it's too late...

Frivolous and formulaic, Twanged features a cursed Irish fiddle, eccentrics summering at the Hamptons, and an egg-eating wacko stalking a redheaded country-music singer. In her fourth adventure in the series, detective Regan Reilly (armed with a pistol in her fanny pack) must sort out all of these mildly amusing if rarely suspenseful details in her role as protectress of fiddle owner, musician, and stalking victim Brigid O'Neill. A number of subplots and last-minute rescues keep the action moving quickly. As in her other books, whimsical detail is Clark's forte rather than high drama or careful consideration of the issues and themes she raises. In this case Irish traditions, feng shui, and the World Wide Web all provide the backdrop and serve as catalysts for the next dastardly deed or safe deliverance.

Clark aficionados will find familiar names and faces: Regan's urbane and sophisticated parents (not surprisingly noted as being on the A list for exclusive invitations by one of the many social-climbing eccentrics) as well as her best friend, Kit, make their requisite reappearances and play minor roles in keeping the fiddle secure and Brigid safe. Clark novices can sleep soundly, as loyal fans already do, knowing the unpleasant evildoers will be safely caught, although not everyone receives his just reward. Securely in the category of mystery lite, Twanged is an easy and festive read--suitable fodder for a few hours' lolling at the beach or with tray table up and seat-belt sign on.