Items related to Sketchbook/scrapbook containing drawings by the Princess... 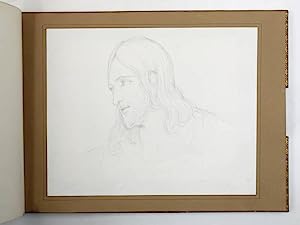 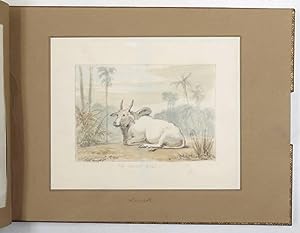 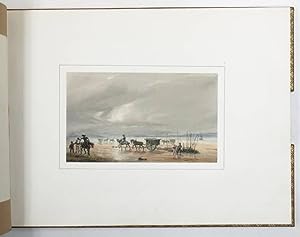 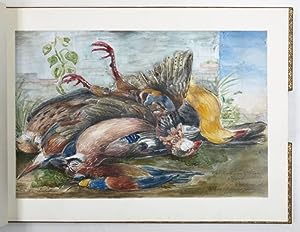 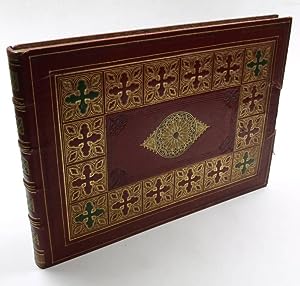 Sketchbook/scrapbook containing drawings by the Princess and other artists, including sketches by William Daniell.

Clementine d'Orleans, princess (1817-1907), daughter of Louis Philippe, King of the French; married to Prince August of Saxe-Coburg, mother to King Ferdinand of Bulgaria.

13 watercolours and pencil and ink drawings mounted on 60 leaves of white and brown-toned paper. Splendid red morocco binding by Alphonse Giroux of Paris with covers and spine gilt and inlaid (wanting the fore-edge lock). Small oblong folio (340 x 245 mm). Red moirée silk endpapers. All edges gilt. A magificently bound, early album containing sketches by the artistically gifted princess as well as by other artists. It was not until the year of her birth that her father Louis Philippe, the Duke of Orleans (1773-1850), who had had to leave Europe after the French Revolution and spent several years in America, returned to France, where in 1830 he accepted the crown, following the deposition of Charles X. Until the February Revolution of 1848 and his emigration to England he reigned as "King of the French". - The present album contains three unsigned portrait studies in pencil attributable to the princess, probably based on details from an old master painting (possibly a Crucifixion or Lamentation of Christ). In her youth, Clementine is known frequently to have copied details from Dürer, Michelangelo, Leonardo da Vinci, Holbein, and Titian. Two of the present studies are dated "1831", when she was but fourteen years old: among the earliest of her known works, they show off her remarkably developed talent. - Among the other drawings in the album is a watercolour still life with fowl, signed "D. Pedro 1850" and inscribed, "Offert Ŕ Son Altesse Royale Madame La Duchesse de Saxe Cobourg Gotha le 3 Juin 1851", while a similar still life is signed "D. Suid [?] fecit / 20 Set. 1850". Other drawings include four pencil sketches by the English painter and engraver William Daniell (1769-1837), who had accompanied his uncle Thomas Daniell to India in 1784 and subsequently produced a wealth of highly regarded landscapes and scenes of Indian life (including work for the famous "Oriental Scenery" volume), many of which are in the Royal collections (cf. Thieme/Becker VIII, 361f.). His signed contributions are two boating scenes (1827, one entitled "Patience in a Punt"), an Indian riverside scene (1827) entitled "The Plantane tree, Bengal", and an "Indian Bull" (1830, inked and watercoloured). Another particularly finely executed watercolour shows a beach scene at Ingouville (in Normandy), dated August 1839 and signed "L. Laurent". In addition, there are three skilled but unsigned pen-and-ink sketches, apparently also by a trained artist, showing a watchman with a shouldered musket, the Falls of Clyde in Scotland ("Chute de la Clyde / Lanarke 11 Juillet 51"), and the profile study of a lady (all but the latter washed in ink). A few torn stubs show the album to have formerly comprised several additional leaves, while the faint nature-printed impressions left by plants between two leaves prove that the album was once also used to preserve botanical mementos. - The princess grew up in the Palais Royale in Paris. In 1843 she was married to Prince August of Saxe-Coburg; in 1861 she would give birth to Prince Ferdinand of Saxe-Coburg, who in 1887 accepted the crown of Bulgaria, against the wishes of the European Powers and indeed those of the house of Coburg. Having long lived under the same roof with the similarly aged Victoria of Kent, later Queen Victoria (1819-1901), Clementine maintained a lifelong correspondence with the Queen of England, and her more than 600 letters are now in the Royal Archive in Windsor. Also the Hoover Institution at Stanford University keeps material from the estate of Princess Clementine within the so-called "Czar Ferdinand I of Bulgaria papers". Her artistic productions have remained enduringly popular: in 1990, one of her pencil drawings ("Etude des chiens") sold for 20,000 Francs (Paris, Tajan, 5 Dec. 1990, lot 23). Seller Inventory # 46104

We have been dealing in valuable books, manuscripts, and autographs since 1883. As members of the International League of Antiquarian Booksellers (ILAB), the Verband der Antiquare Österreichs (Austrian association of antiquarian booksellers), as well as the Verband deutscher Antiquare e.V. (German association of antiquarian booksellers), we are bound by these organizations' code of ethics. A large proportion of our customers is made up of institutions, including renowned international universities and major state libraries. We keep contact with our private customers at international book fairs and through our online catalogues. You are welcome to visit us on our business premises from Monday to Friday, 10 AM to 6 PM. We are happy to take buying orders for the important book auctions in Germany and Austria, which we attend regularly. We dedicate special attention to the estates and archives of important personalities of the arts and sciences in European and world history. Through specially prepared archive catalogues we have been able to sell the archives of Viktor Léon (librettist, 1859-1940), Leo Fall (operetta composer, 1873-1925), Lotte Lehmann (singer, 1888-1976), Otto Tressler (actor, 1871-1865) and Max Reinhardt (director, 1873-1743), as well as the last privately owned important original manuscripts by Ludwig Wittgenstein (philosopher, 1889-1951). Along the lines of this specialization our buying policy concentrates especially on these fields.


All offers are subject to sale and alteration without prior notice. All orders are processed in the strict order of their entry.
Unless described otherwise, the books are complete and in good condition. All material is adequately described and guaranteed genuine. Any item can be returned within two weeks of receipt without any obligation to the customer if unrepresented defects or bibliographic inaccuracies are found. We guarantee the authenticity of all autographs without time limit to the orig...